Proteas made to work for win over Uganda 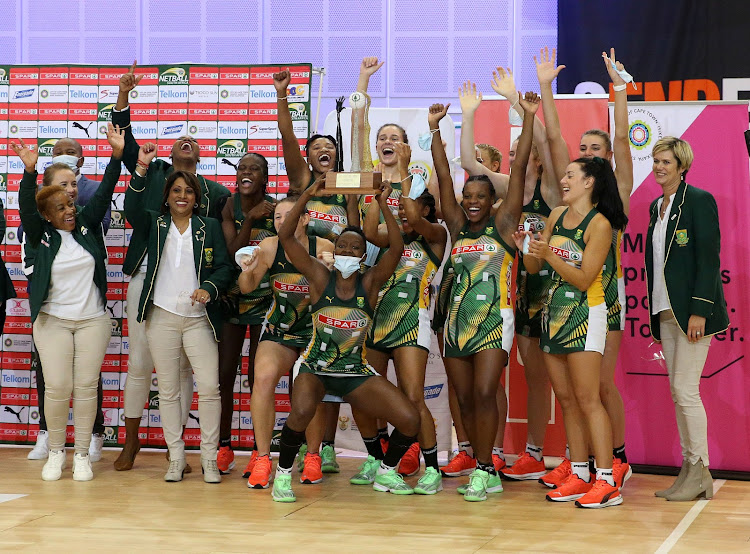 The SPAR Proteas racked up their sixth SPAR Challenge Tri-Nations netball tournament victory at the Cape Town International Convention Centre on Wednesday evening when they beat Uganda 44-32 to secure the trophy.

The Proteas beat Uganda and Namibia three times each.

It was a tough match for the Proteas, who were made to fight all the way by the Ugandan She-Cranes, who were in the lead until the middle of the third quarter.

The She-Cranes, who had a rest day on Tuesday, came out with guns blazing and went into the lead (5-4) midway through the first quarter. Uganda made use of high, fast passes and their shooters appeared unstoppable.

By the end of the first quarter, they were 10-7 ahead.

The Proteas started clawing their way back in the second quarter, which they won by 10 goals to nine. The halftime score was 19-17 to Uganda.

At one stage, Uganda were a substantial nine goals ahead, but SA scored seven goals on the trot to make up the difference. They drew level (22-22) five minutes into the third quarter.

The South African shooting pair, Sian Moore and Renske Stoltz, had difficulty getting the ball into the net for much of the first part of the match, though Stoltz scored a blinder from the edge of the circle.

Captain Bongi Msomi at wing attack and Izette Griesel at centre combined superbly to feed the ball into the circle, and goal defence Monique Reyneke was outstanding, intercepting and turning the ball on a number of occasions.

Rome Joubert, who has announced her retirement from international netball, came on for the last five minutes to tumultuous applause from her teammates. She first represented SA at the Quad Series in 2018 and has 22 caps.

Proteas coach Dorette Badenhorst was happy with the victory, though she said there was always a lot to work on.

“What is worrying is that our shooters’ percentages are too low.  It’s no good the centre court getting the ball to the circle if the shooters don’t get the ball in the net,” she said.

Badenhorst said the SPAR Challenge series had been very valuable as the SPAR Proteas prepare for the Commonwealth Games in Birmingham in 2022 and the Netball World Cup in Cape Town in 2023.

“These were ranking matches, and because Uganda are in the top 10, we get good ranking points from beating them.

“It was also valuable to see the depth of talent in the next tier of players. Some of them will play at the World Cup and it is good to see how much talent we have.”

Msomi, who was named most valued player, said the SPAR Challenge, and the weeks of preparation preceding it, had been very important as new players were brought into the fold and took on the identity of Proteas players.

“We are very much a team and the new players have bought into that,” said Msomi.

Earlier, the President’s XII beat the Namibian Desert Jewels 44-32, after leading 23-16 at halftime.