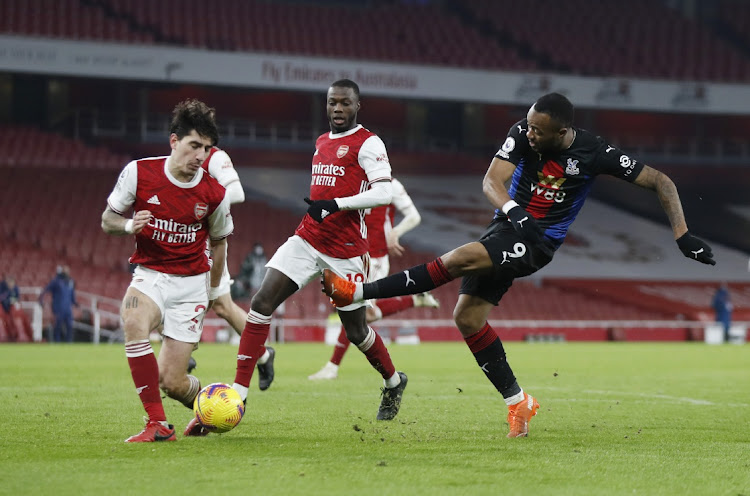 Arsenal's impressive recent resurgence in the Premier League was checked by Crystal Palace as their attack failed to spark in a dismal 0-0 draw at the Emirates on Thursday.

Mikel Arteta's side were bidding for a fourth successive league win but could find no way through an obdurate Palace who, if anything, might feel they could have emerged with a win.

Palace were well worth their point and were the better side in the first half in which defender James Tomkins headed against the crossbar and Christian Benteke went close.

They remained in 11th spot in the standings with 24 points from 18 games with Palace two places lower with 23 points.

With the locked down capital reeling under the Covid-19 surge, this was perhaps a good night for fans to have no other option but to watch the game on television.

Incessant drizzle all day created the perfect, zippy playing surface, but rather than inspire a feast of attacking play it was a cagey affair as Palace stretched their unbeaten league run against Arsenal to five.

The main positives for Arsenal were a first home clean sheet in the league this season and the return of Thomas Partey as a second-half substitute having recovered from injury.

Palace manager Roy Hodgson was happy with a point.

“I am more than satisfied. We created opportunities and in the second half we wasted positions on the break. We defended excellently and I am very proud of them,” he said.

Pierre-Emerick Aubameyang did threaten early on for Arsenal with a dipping effort that was fumbled by Guaita but Palace provided more attacking threat with Eberechi Eze impressive.

Eze released Benteke in on goal but his shot was tame and it was Eze's free kick which Tomkins headed against the crossbar.

Benteke also forced a flying save from Bernd Leno after connecting with a superb Tyrick Mitchell cross.

With Arsenal's in-form left-back Kieran Tierney injured, the hosts were far too predictable and Aubameyang and Alexandre Lacazette were left to feed on crumbs.

Lacazette did fire one chance into the side-netting but all in all it was a laboured display by Arteta's side.

“We probably didn't do enough to win the game,” Arteta said. “We are playing a lot of games and you can see fatigue is paying a price, many players aren't fresh.”