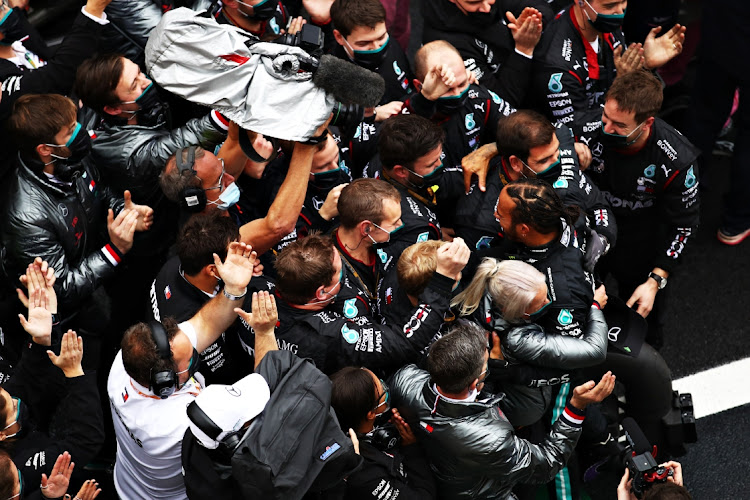 Mercedes expect to start contract talks with Lewis Hamilton in the next few days now the Briton has clinched a record-equalling seventh Formula One world championship, team boss Toto Wolff has said.

"Flying back from a seventh drivers' championship, you can't talk about a contract. It wouldn't do justice to the achievement," the Austrian told the BBC.

"We're going to give it a few days then we are going to talk about it."

He also indicated that there was still no rush.

"I think more than likely we are looking towards the end of the year," the Austrian said of the timeframe.

"Not that we wouldn't find time for each other but I don't want to put ourselves under pressure to say before Bahrain or before Abu Dhabi we will announce a new contract because there isn't any pressure. When it's done it's done."

Formula One heads to Bahrain next week for races on successive weekends before the December 13 finale in Abu Dhabi.

Both sides have said they want to continue but just have to put pen to paper.

"We’ve got three weeks in the Middle East - so, now it’s a bit more chilled but I still have three races ahead of me that I want to win," Hamilton said on Sunday when asked about the talks. "It’s not done but we will get it done, I’m sure."

Mercedes have won the last seven constructors' and drivers' titles and the cars and rules are substantially the same next year.

Hamilton is now Formula One's most successful driver of all time, with a record 94 wins.

"He loves racing and the competition, as does the team and myself ... so I see us going for more next year, maybe putting another great year on and then obviously we have this tremendous, challenging regulations change for 2022," said Wolff.

Meanwhile, Sergio Perez more than deserves to stay in Formula One, managing director Ross Brawn said after the Mexican finished second to now-seven times world champion Lewis Hamilton in Turkey at the weekend.

Perez is without a seat for 2021 after Racing Point signed four-times world champion Sebastian Vettel, who finished third for Ferrari at Istanbul Park on Sunday.

"Perez put in a great performance ... it would be a tragedy if he isn’t in F1 next year," said Brawn, who worked with Michael Schumacher during a golden era at Ferrari and Hamilton at Mercedes in 2013, in a column for the www.formula1.com website.

"He more than deserves his place on the grid. If you’re a team (that) wants a competitive driver to maximise every opportunity, Perez is your man."

Perez's main hope is a seat at Red Bull, who have yet to decide whether to retain Thai racer Alexander Albon as Max Verstappen's team mate.

The Mexican has scored 100 of third-placed Racing Point's 154 points from 14 races, despite missing two rounds after contracting COVID-19.