Johnson not ready to rest on laurels after winning Masters 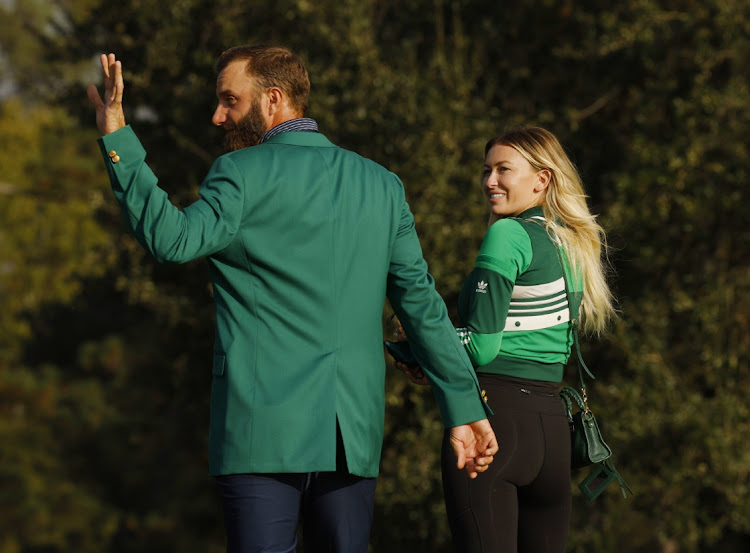 Dustin Johnson of the US celebrates winning the US Masters with partner Paulina Gretzky at Augusta National Golf Club on November 15, 2020
Image: BRIAN SNYDER / REUTERS

Dustin Johnson exudes an air of cool nonchalance on the course but that calm exterior hides a burning desire to compile a major record that does justice to his rich talents.

The tears he shed upon winning the Masters with a record low score on Sunday showed a rarely seen side of a player who was all too aware that many questioned whether he really had the inner fortitude to stand up and be counted on the biggest stage.

Johnson has almost an air of indifference when he speaks to the media in his monotone manner, which can give the mistaken impression that he doesn't really care.

The truth is rather different.

"I proved to myself that I do have it, because I'm sure a lot of y'all think that, or even I, there were doubts in my mind, just because I had been there," he said on Sunday, looking every bit the part in his fresh Green Jacket.

"I'm in this position a lot of times. (I was thinking) when am I going to have the lead and finish off the golf tournament or finish off a major? For me, it definitely proved that I can do it.

"Since I played my first Masters, it's been the tournament I wanted to win the most."

Johnson shot a closing 68 and finished on a Masters record low score of 20-under-par 268 at Augusta National, five shots in front of Australian Cameron Smith and South Korean Im Sung-jae, who both shot 69.

He made a record low four bogeys in 72 holes.

Johnson got the job done with an unusual swing in which his left wrist is uniquely bowed rather than hinged at the top of the backswing, before giving way to an impact position that makes it virtually impossible for the ball to hook left.

"Now I think Dustin is the most complete player in the game," his coach Claude Harmon told a small group of reporters.

Another instructor who works with several tour players would not even try to teach Johnson's swing to an amateur.

"Just because he's won the Masters you wouldn't want to tell someone to do that," Brad Hughes told Reuters.

"It's pretty hard to do what he does. (Many would) probably break their wrists trying. He's obviously very supple in that area."

Before Sunday, Johnson had been 0-for-4 when leading into the final round at majors.

Anything less than victory would have been a crushing blow for the 36-year-old who knows that he should already have four or five majors in his possession by now.

Having won the 2016 US Open, the Masters crown doubled his major haul.

He still has time to reach perhaps half a dozen, and plans to keep playing for about another decade in that quest.

"I dream of winning a lot of majors," he said. "Just hadn't quite happened yet. Hopefully this one will help, though, give me a little spring.

"I'm pretty good at controlling my emotions, because I'm out playing golf. I work so hard to be in this position and to finally have the dream come true, I think that's why you see all that emotion," he added after his triumph.