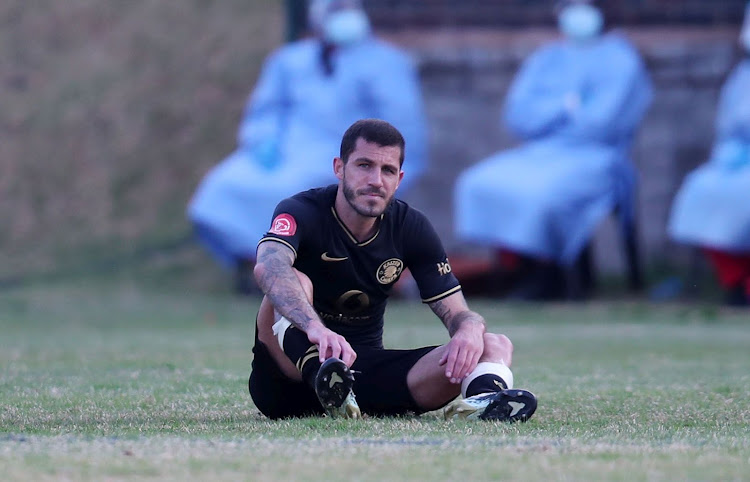 Kaizer Chiefs coach Ernst Middendorp did not have an explanation for why his players “stepped back” after he had asked them to push for a second goal in the second half of their 1-1 draw against Baroka FC on Saturday‚ a result that saw Mamelodi Sundowns lift the Absa Premiership trophy.

Middendorp admitted he was somewhat bemused by Amakhosi’s response coming out from the break at Bidvest Stadium‚ where Baroka‚ as could be expected from a team desperate for a draw to escape the playoffs‚ lifted their intensity at 1-0 down from the break.

Middendorp looked to have aged a year facing SuperSport’s television cameras after his team had the championship in their 50th anniversary campaign in their grasp from Khama Billiat’s 39th-minute opener‚ but blew it conceding Manuel Kambala’s 59th-minute equaliser.

“Ending up where it’s the possibilities that are in our own hands‚ and being second after having over 28 match days in position one‚ of course it’s disappointing‚” the coach said.

“Congratulations to Mamelodi Sundowns‚ to Pitso [Mosimane‚ Downs’ coach]. They won it.”

Middendorp was visibly disappointed at having come so close‚ and in the end having to see his team capitulate quite meekly‚ and embarrassingly‚ as they were unable to create a chance for 26 minutes after Kambala’s equaliser.

But his quite dispassionate answers also stood in contrast to the fire in the belly and the emotion that his counterpart‚ Mosimane is famous for at Sundowns‚ who were 3-0 winners over Polokwane City at Dobsonville Stadium.

Downs played in a gruelling five competitions in 2019-20 to Chiefs’ three‚ including the Caf Champions League. They closed a 13-point gap from December to 56 points each on the final day‚ where Chiefs still had the advantage of a +21 goal difference to Sundowns’ +18‚ and would have lifted their first trophy in five seasons with a win by any margin against Baroka.

“I think strategically absolutely we had the dominance in the first half with the wide players. And we had a very clear discussion at half time‚ ‘Just push forward‚ look for the second goal’‚” Middendorp said‚ in his summary of the 90 minutes.

“And‚ ja‚ interestingly they stepped back‚ and fouls after fouls around the box‚ and then you concede this 1-1.

“And then‚ of course it gets very difficult to play a team like Baroka‚ which other teams have seen and experienced too.”

Middendorp said he does not know yet how much credit he and his team will receive for their best finish in five years‚ and for turning around 2018-19’s disastrous ninth placing by challenging until the final day of 2019-20‚ and coming so close also to the coach’s first league title.

“It’s not my decision. Other people will decide. I think you have to realise you do not win games just with the DNA of being a big club. You have to work it‚ you have to push yourself at any minute‚” the 61-year-old said.

“That’s the reality in soccer and professional soccer. In the end we had several games where I believe we could have done better‚ and then we are ending up like this.”

Chiefs‚ after winning a second double‚ including the league‚ in 2014-15 under Stuart Baxter‚ have not won another trophy‚ and have finished fifth‚ fourth third and last season’s ninth in that period in the PSL. Their best points total previously in those five years was 50 in 2015-16 and 2016-17.

With Saturday’s match-up being a Baroka home game‚ that club did not organise a post-match press conference‚ choosing‚ as per the league’s rules in the bio-bubble‚ to simply send a video of coach Dylan Kerr’s reaction via the PSL’s WhatsApp group.

By Sunday morning Chiefs had not sent any reaction further to his post-match television interview from Middendorp‚ who also had refused to attend the post-match digital conference of his team’s 1-0 defeat against Bidvest Wits on Sunday.