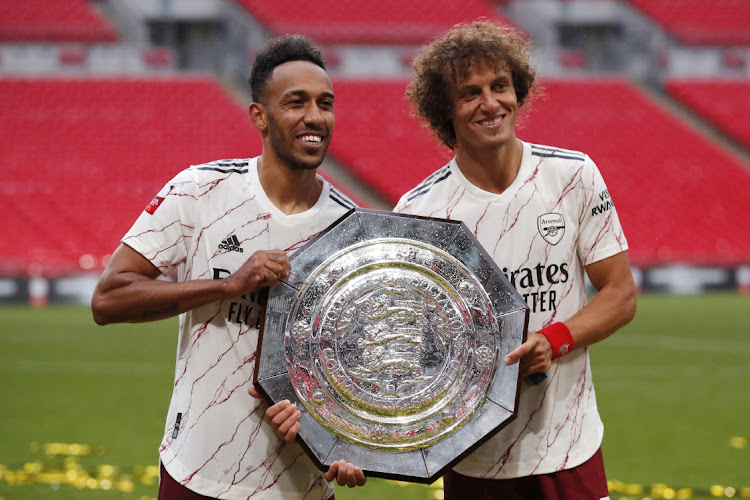 Pierre-Emerick Aubameyang and David Luiz of Arsenal celebrate with the Community Shield Trophy after beating Liverpool on penalties in the final at Wembley Stadium on August 29, 2020 in London
Image: ANDREW COULDRIDGE / GETTY IMAGES

Arsenal beat Liverpool 5-4 on penalties on Saturday to lift the Community Shield, the curtain-raiser for the English domestic season, after the two sides played out a 1-1 draw on a chilly afternoon at Wembley.

Gunners captain and match goal-scorer Pierre-Emerick Aubameyang blasted home the final kick of the afternoon to complete the north London side's second win over the league champions in the space of six weeks after a shortened summer break.

Mohamed Salah, Fabinho, match goal-scorer Takumi Minamino and Curtis Jones all scored for Liverpool in the shootout, but late substitute Rhian Brewster blasted his shot onto the bar.

Reiss Nelson, Ainsley Maitland-Niles, Cedric Soares and David Luiz all scored for the Gunners, before Aubameyang finished the job to lift his second trophy within a month following the side's FA Cup final win over Chelsea on August 1.