Intrepid Sunwolves run out of road 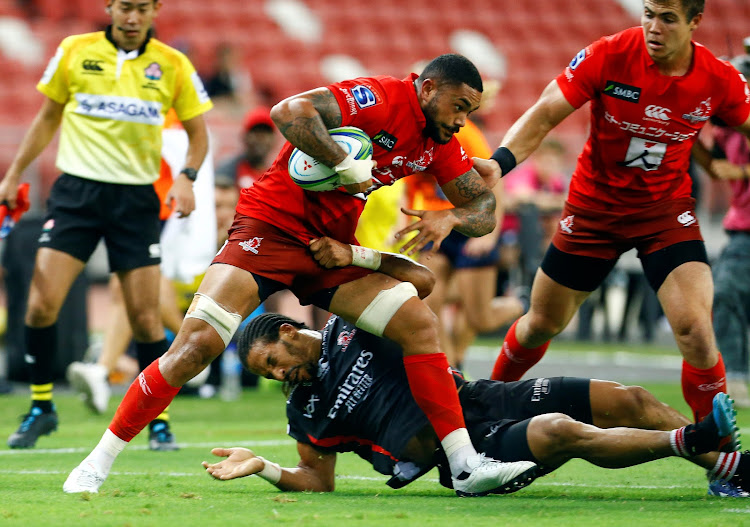 FAST-PACED AND AGILE: Rahboni Warren Vosayaco of the Sunwolves in action. The coronavirus pandemic has accelerated the Japanese franchise’s exit from Super Rugby
Image: FELINE LIM/REUTERS

Both “if that’s the way it is”‚ and the more commonly used meaning for “sayonara” as “goodbye”‚ seem appropriate for the departing Sunwolves.

The oddly named mythical creature that graced Super Rugby for four and a bit seasons is set to disappear into distinction.

The news of the Japanese team’s demise was made official this week when Rugby Australia announced that due to Covid-19-enforced travel restrictions and border closures the Sunwolves would not have enough time to prepare should the tournament restart on July 3.

That effectively means the Sunwolves are no longer part of the Super Rugby landscape.

It is an unpalatable end for any franchise and a bitter pill for Japanese rugby.

The Sunwolves, however‚ who debuted in Super Rugby in 2016 as part of a tournament expansion‚ were always up against it.

It is perhaps best illustrated in the fact that they had five coaches in as many years.

Though they had an enthusiastic home support at Tokyo’s Prince Chichibu Stadium‚ they were also required to play matches in Singapore‚ and occasionally in Hong Kong.

That wasn’t their only stumbling block.

Their existence wasn’t propped up by a large corporation‚ as is the case for the teams playing in the Japanese league.

Though they had some foreign input, they failed to attract big-name players.

The Sunwolves won just eight of their 62 games in Super Rugby with their highest finish second-last out of 18 teams in 2017.

In 2018 the Bulls lost to them in Singapore‚ while the Stormers suffered the same ignominy in Hong Kong.

They won only two matches away from home‚ one of them a famous victory over the Chiefs in Hamilton, and they beat the Waratahs in Newcastle in 2019.

Ultimately‚ though‚ their number was up once the Japan Rugby Football Union indicated it could no longer bankroll their participation in Super Rugby.

Sanzaar wasn’t going to slice into its profits to safeguard the team’s continued presence in Super Rugby.

This was always going to be their last season in Super Rugby but the coronavirus pandemic and its ever-stretching tentacles drained the life out of the Sunwolves a little earlier than expected.

They will depart the scene having made few waves in Super Rugby but their true impact reverberated well beyond the transcontinental competition.

The Sunwolves‚ through the players they bequeathed the national team‚ in no small measure helped make the 2019 Rugby World Cup a source of national pride for Japan.

The fast-tempo game the Sunwolves played over four seasons in Super Rugby helped steel the Brave Blossoms’ warriors for their ultimate moment in the sun‚ the World Cup on home soil.

Playing the game at relentless, breakneck speed may have had its limitations on the road in Super Rugby‚ but in Tokyo’s September/October humidity it proved hugely effective against less nimble opponents at the World Cup.

Coaches Jamie Joseph and Tony Brown‚ who had coached the Sunwolves‚ took the same blueprint and emboldened a fired-up Brave Blossoms.

Their final pool game against Scotland was arguably one of the most breathtaking and emotionally charged matches ever at the Rugby World Cup.

That win got Japan into the quarterfinals, where they bowed out to eventual champions the Springboks.

The Sunwolves’ greatest gift to the game was not so much what they achieved in Super Rugby but how they‚ through painstaking industry and ingenuity‚ helped build a national team that captured hearts and minds at home‚ and the sport’s imagination at large. — TimesLIVE