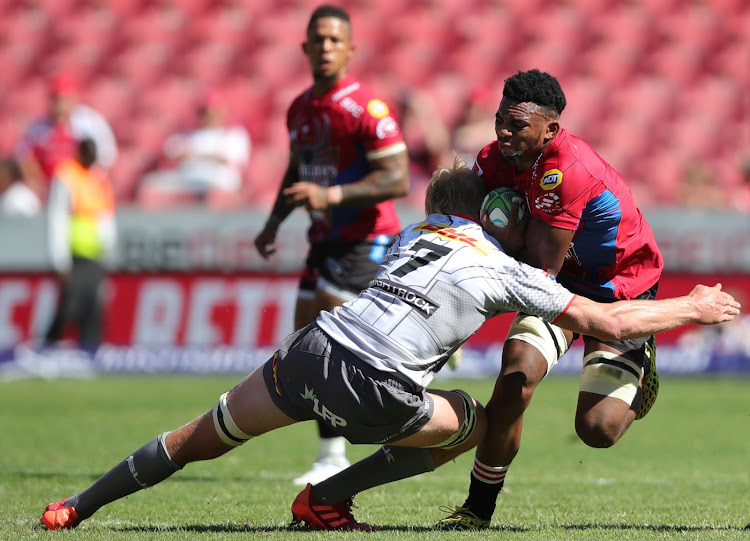 Vincent Tshituka of the Lions tackled by Pieter-Steph du Toit of the Stormers during a Super Rugby match at Ellis Park Stadium, in Johannesburg on February 15 2020.
Image: Samuel Shivambu/BackpagePix

The Stormers may be the only unbeaten South African side in Super Rugby but they are not nearly playing to their capacity.

It is their coach John Dobson’s considered opinion that several areas exist in which his team can make some marked improvements.

“We are not even operating at half our capacity‚ which is frustrating‚” said Dobson following his team’s thrilling 33-30 win over the Lions at Ellis Park.

“The good thing is we are playing with character. I want to see us play more rugby.”

“To get three from three and not firing is good. We’ve got Herschel Jantjies back next week and Jaco Coetzee. We are in a good position going forward.”

The Stormers almost fluffed their lines at the death as the Lions overturned a 15-26 deficit to lead 30-26 with three minutes to go. Ruhan Nel’s try after the hooter‚ however‚ restored the conference of the leaders’ lead.

“I took a view when they scored‚ ‘that’s it. We’ve chucked this one’. I started packing up because it would be too good to be true if we got back.

"It was agony but we showed some character which is one thing we’ve done this season.

“They said to themselves it was a minute and a half‚ or more left and that is plenty.

"Pieter-Steph (du Toit) is a calm‚ thoughtful‚ farmer‚” he said about the star flank who took over the captaincy after Steven Kitshoff left the field.

Dobson admitted that it was a tricky game as his team was widely expected to come away with a win.

“People had written the Lions off. It was a game we were expected to win and those are the worst games.

“They caught us. They caught our bigger forwards towards the end. Elton’s (Jantjies) try was straight between Frans (Malherbe) and Cobus (Wiese).

“My frustration was at 26-15 that we had quite a few opportunities in their 22 that we didn’t convert.

"The Lions get stronger towards the end and the pace of the game caught our forwards who have come back from injury.”

The Stormers host the Jaguares at Newlands on Saturday and it is an occasion the coach is relishing.

“Next week is an absolute humdinger between the conference favourites and an unbeaten side.

"The Jaguares are a physical side but they are slightly different to what they were last year because of some personnel changes.

"Newlands is a different environment to Ellis Park because you don’t quite get the same speed.

“Against the Jaguares we will go back to our traditional game with our forwards carrying nicely and hopefully creating space for our backs.

“They are touted to be the conference winners. It should be an absolute cracker at Newlands. We will play nicer rugby than we’ve played over the last few weeks‚” said Dobson.