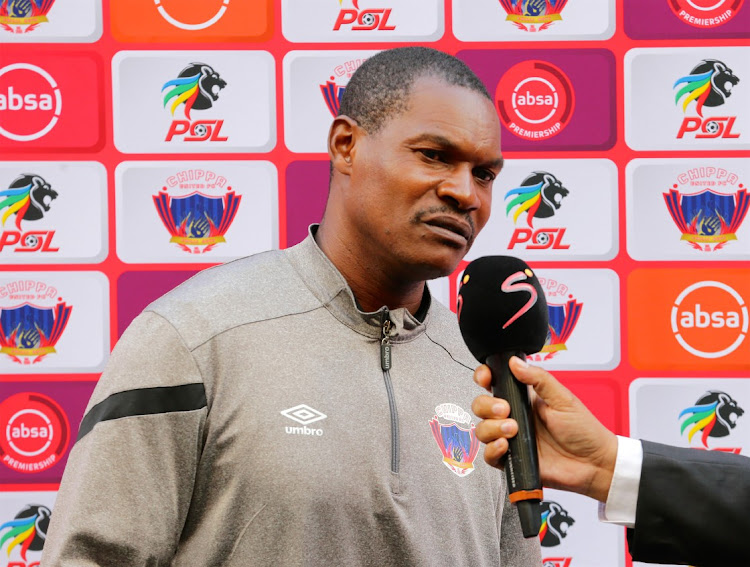 Chippa United coach Norman Mapeza is pleased with the point they earned against Baroka FC in the Absa Premiership fixture at the Nelson Mandela Bay Stadium on Sunday.

The Port Elizabeth-based football club extended their unbeaten run in the league to three matches when they were forced to settle for a goalless draw against Baroka.

After successful consecutive wins against AmaZulu and Black Leopards, Mapeza admitted on Sunday that Bakgakga gave them a hard time.

“I think it was good point for us,”  the 47-year-old Zimbabwean coach said.

“We really struggled a bit today.

“Our last game against Black Leopards the guys worked so hard, but at the end of the day I am more than happy with the point.

“Considering where we are coming from I am not disappointed.

“If I were to be disappointed I would be mad.

“We have played three matches now and managed to collect seven points without conceding.

“That is something that is very positive.

“We just need to regroup, keep working hard and now concentrate on our next match against Cape Town City  on Saturday.”

Chippa’s skipper and goalkeeper Veli Mothwa has been a great contributor to the team’s solid defence.

Mothwa, who was on the bench at the start of the season, made his first appearance for the Chilli Boys against AmaZulu and his been a regular since then.

His performances have been consistent and in doing so the goalkeeper has managed to keep a clean sheet in the past three matches that he has played.

When asked to comment on the goalkeeper’s performance thus far Mapeza said: “I am not someone who likes to talk much about individuals.

“This is football and it’s different to tennis which is an individual sport but football is about collective effects.

“Those guys in front of him [Mothwa] are also defending well.

“He has been doing well but I think the whole team have been doing very well.

“We just need to keep working hard. We still have important games coming; we will see how things go.”

Despite the recent positive results, Chippa are still at the bottom of the log table with 11 points from 13 games.

They are just a point away from the safety margin.

Meanwhile, Baroka coach Witson Nyirenda said their intention was to get three points, but he was satisfied with the point collected away.

“Yet another one [game] which we were supposed to wrap up with three points.

“We gave away this game and we collected one point, but nevertheless that is not disappointing.

“I think one point away from home at this stage is okay.

“We came here for three points and you saw how we played.

“The statement of intent was clear and we created more chances  than them [Chippa].

“We were the better team in most parts of the game.

“We looked more dangerous on the goals but I think our problem is with finishing. It is not coming yet.”

Nyirenda said the best thing about Sunday’s game was keeping a clean sheet.