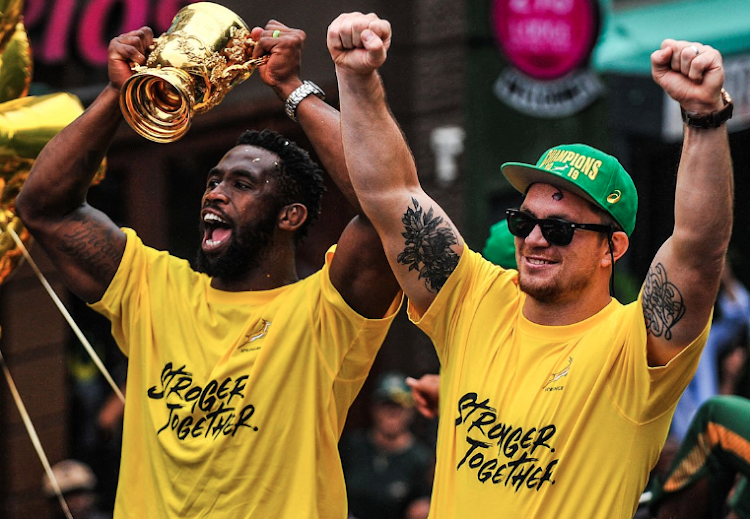 Springbok captain Siya Kolisi has expressed heartfelt thanks to fans who come out to support the team during the Rugby World Cup (RWC) trophy parade.

Kolisi thanked SA for the support shown to the Springboks since they were crowned RWC champions in Japan on November 2.

“The last week has probably been one of the best of my life. I speak on behalf of all my teammates and management when I say the support we’ve received has been nothing but remarkable and unbelievable.

“The celebrations in Tokyo, with President Cyril Ramaphosa, minister Nathi Mthethwa and Prince Harry in attendance, were very special - but nothing could prepare us for what was waiting back here in South Africa," Kolisi said during his side's trophy tour.

"Look at how we are all different. Different races, different backgrounds, and we can prove that South Africa can be united. We came together for South Africa and made it happen.

The Springbok captain said the team's victory was a win for "ordinary South Africans".

“From our arrival at OR Tambo International Airport last Tuesday, the reception with President Ramaphosa at the Union Buildings, meeting and greeting our loyal sponsors, and receptions by local government around the country, it’s been a fantastic and whirlwind week.

“But we won the Webb Ellis Cup for ordinary South Africans, and to be able to present the trophy to them has been phenomenal," he said.

Parliamentarians and South Africans gathered around parliament awaiting the Springboks' arrival on November 11 2019 for the last leg of the Rugby World Cup trophy tour. In a special moment, the Boks had the crowd going crazy when they pulled out their best dance moves to Brenda Fassie's hit, Vul’indlela.