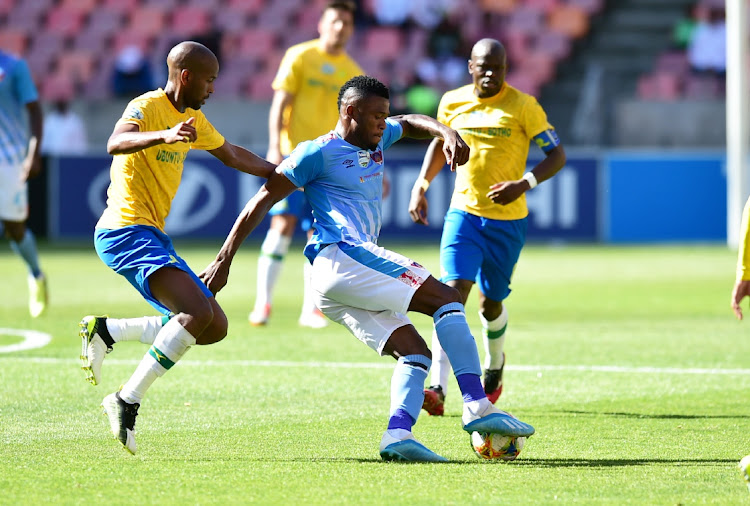 There was heartbreak for Chippa United as they lost 4-3 on penalties to Mamelodi Sundowns in their Telkom Cup Knockout Cup quarterfinal at Nelson Mandela Bay Stadium in Port Elizabeth on Sunday.

The match was forced into extra time after the sides were deadlocked at 2-2.

The score remained the same through the extra 30 minutes.

But it was Sundowns who held their nerve to convert four spot kicks and book themselves a semifinal spot, while Chippa missed two.

Chippa led twice in the match — first through Chid Kwem and then Silas Maziya.

But Sundowns equalised both times, with their goals coming from a Gaston Sirino double.

Despite the loss, Chilli Boys coach Norman Mapeza will be proud of the performance by his troops, who played their hearts out.

The Chilli Boys were scrappy at first with no clear direction, but they soon found their form after Kwem scored the opening goal just after 12 minutes of play.

The goal came via a superb through ball from Lehlogonolo Masalesa and Kwem’s striker caught Sundowns goalkeeper Denis Onyango off-guard, leaving him flat-footed as he watched the ball hit the back of the net.

They kept on pushing for a second goal but their attempts were fruitless.

Instead it was the visitors who launched attacks on the Chippa goalmouth, which had the Chilli Boys’ defence putting in an extra shift.

Just before the halftime mark, Sundowns striker Mauricio Affonso had the chance to level the score after he found himself faced with an open net — but instead he sent the ball flying over the crossbar.

Sirino also tried his luck but his strike missed the upright by an inch.

Chippa went into the break leading 1-0 but the Brazilians pulled one back in the second half through a penalty which was converted by Sirino.

Phakamani Mahlambi was fouled by Chippa’s defender Kevin Moyo inside the box and referee Luxolo Badi called a penalty straight away.

In the 57th minute Chippa’s  Silas Maziya scored a cracker and extended his team’s score to 2-1.

However, the Chilli Boys’ excitement was short-lived as Sirino once again levelled matters after a bad goalkeeping error.

During extra time Tercious Malepe received his second booking and was sent to the dressing room by referee Badi as Chippa finished the match with 10 men.

Meanwhile, Kaizer Chiefs have been drawn at home to Maritzburg United in the semifinals of the Telkom Knockout as they bid for their first piece of silverware in four and a half years.

Chiefs will meet Maritzburg for the first time this season‚ having claimed a 1-0 home win the last time they met in March.

Mamelodi Sundowns will travel to Durban to face Lamontville Golden Arrows in the other semifinal‚ which keeps the possibility alive of a Chiefs-Sundowns decider in December.The semifinals will be played on the weekend of November 22-23‚ with the exact kickoff times and venues to be announced by the Premier Soccer League. — Additional reporting TimesLIVE