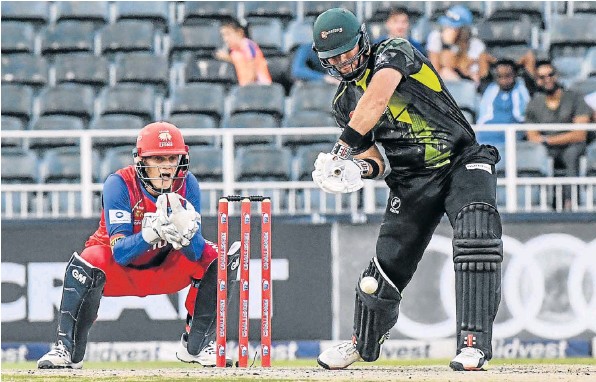 Warriors captain Jon-Jon Smuts on his way to making a superb hundred in a losing cause in the CSA T20 Challenge final against the Lions at the Wanderers Stadium in Johannesburg on Sunday evening
Image: Gallo Images

A maiden career century by captain Temba Bavuma upstaged that of counterpart JonJon Smuts as the Highveld Lions won a thrilling CSA T20 Challenge final, beating the Warriors by 11 runs in Johannesburg on Sunday evening.

He was dismissed with 12 needed off five balls, having walked in with his side on five for one and then seeing them slump to 56 for five in pursuit of 204.

And despite playing one of the finest innings witnessed in the format, his day ended in pain when Nono Pongolo held on to a good catch in the deep after a collision with Reeza Hendricks as the Lions celebrated.

The trophy was their second of a dream campaign in which they also won the 4-Day Domestic Series title, the match at the Wanderers Stadium drawing the curtain on the 2018/2019 franchise season.

The match itself was about a few individuals.

Bavuma’s innings was made possible by a sensational Rassie van der Dussen at the other end, the pair sharing a record 165-run third wicket partnership after they had slipped to 30 for two after losing the toss and being put in to bat.

Proteas star Van der Dussen clubbed 73 off 41 balls (3 fours, 5 sixes) to help his captain break a long-standing record of 154 held by Henry Davids and Benji Hector for the Cape Cobras against the Eagles at Kimberley in 2006/2007.

It was also the second-highest stand for any wicket in the franchise T20 tournament, the pair being especially brutal to Sithembile Langa, thrashing him for 69 in four overs, another competition record and one that surpassed the none for 57 by Junior Dala for the Titans against the Knights in 2016/2017.

Andrew Birch finished with the best figures for his side, a solid three for 36.

The Eastern Cape men then looked as if they were going to roll over even before the chase could get going as the outstanding Bjorn Fortuin (4/27), one of the stars of the T20 event, ripped through their top order.

He was well supported by Migael Pretorius (3/35) as the match appeared to be headed for an early finish.

But Smuts finally found support through Onke Nyaku (27) as they added 73 for the sixth wicket to get the score to 129.

Although there was not much support from there, Smuts took the game right down to the wire, aided by an expensive 16-run penultimate over by Lizaad Williams (2/49).

But Pretorius enticed the false stroke with just 12 needed and Pongolo held on to the crucial skyer by the key batsman to send the Lions into delirium.

“Although cricket remains a team game it would be remiss of me not to make special mention of the respective captains’ innings of Temba Bavuma and Jon-Jon Smuts.

“By any standard this was a wonderful final.

“It has been a highly competitive season of franchise cricket, one of the highlights being the way the league play has gone down to the final weekend in deciding which four teams qualified for the semifinals.

“This happened once again in this competition, the outcome depending on the finally completed league match between the Lions and the Titans.

“With a number of our Proteas missing the tournament because of their overseas commitments, either at the Indian Premier League or the England county season, this has provided the opportunity for a number of young players to make their mark.

“Ryan Rickelton, Matthew Breetzke, Sinethemba Qeshile and Bjorn Fortuin, who all featured in the final, fall into this category.

“The future of our cricket looks very bright as our talent development pipeline continues to turn promising talent into polished diamonds.

“It has also been heartening to see young coaches making their mark at franchise level.

“Enoch Nkwe has had a particularly outstanding debut season at the Lions, doing the franchise double, and Rivash Gobind at the Warriors and Ashwell Prince at the Cape Cobras have also done very well.

“I am sure the selectors at the various Mzansi Super League teams will have taken note of the outstanding individual performances during the CSA T20 Challenge,” Moroe said. –