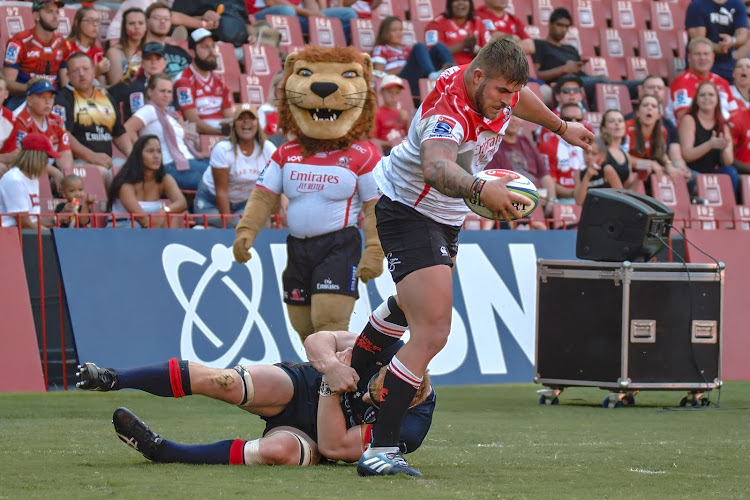 Malcolm Marx of the Lions during the Super Rugby match between Emirates Lions and Rebels at Emirates Airline Park on March 16, 2019 in Johannesburg, South Africa.
Image: Wessel Oosthuizen/Gallo Images

Cyle Brink and his bulging gainline busting frame returns for the Lions against the Sharks on Friday and not a moment too soon.

The Lions are in anticipation of a full frontal assault from the Durban side who have already suffered three derby defeats (two at home) this season.

Brink‚ who sustained a serious knee injury while on duty for the Springboks last year‚ has been side lined for almost eight months but Lions coach Swys de Bruin expects him to hit the deck running.

“It is a massive boost‚” said the coach about the barrel chested flanker’s return.

“Cyle is just such a team man. He doesn’t say much but he talks on the field. It is great to have him back. You can feel the aura around him. When I announced to the team and I read his name there was a nice vibe in the team. You always know when you select the right guy at the right time when the guys react like that because it makes it special.”

Long-time friend and teammate Malcolm Marx is chuffed to have his chum back.

“I’ve been at school with Cyle and Dylan (Smith) and it is nice to have him back after a seven-month injury. I’m looking forward to it‚ he looks more ready than ever.”

Brink slots into a backrow that continues to feature regular lock Ruan Vermaak at No8‚ but that too taps into De Bruin’s strategy of matching the Sharks for height and girth.

De Bruin is expecting bone rattling’ physicality from the Sharks on Friday and he has opted to fortify his bench too.

“They are going to be desperate. We know what’s coming. It is going to be very physical. But we’re ready.”

With that in mind the Lions listed Hacjivah Dayimani among their backline substitutes‚ but the Lions effectively have a six-two forward split.

Among the backs Lionel Mapoe shifts to inside centre for his 99th Super Rugby match and perhaps more interestingly‚ he’ll have regular wing Aphiwe Dyantyi for company in midfield.

“When he came on against the Sunwolves he was right on song. He played 10 as a schoolboy‚ he played a bit of 13‚ then 15‚ then became a Springbok wing. He’s a footballer‚ wherever you play him. It is just one of those things.”

De Bruin explained his players are all up to speed with their play book and that their versatility makes it so much easier for them to hop positions.

“Later we will play him wing again but there are certain concepts at 13 that is good for him‚” he said about Dyantyi.

“It is good for his development because he is still a young player. You never know where his future is but at least we would have given him a fair chance at 13.”

As much as the Lions are expecting the Sharks to be physical‚ the visitors will have to do so without their angry warthog of a hooker Akker van der Merwe.

The bellicose hooker copped a ban for striking out at Schalk Brits of the Bulls last Saturday.

“To be honest‚ it’s a bit sad‚” said Marx about missing out on the opportunity to play against Van der Merwe.