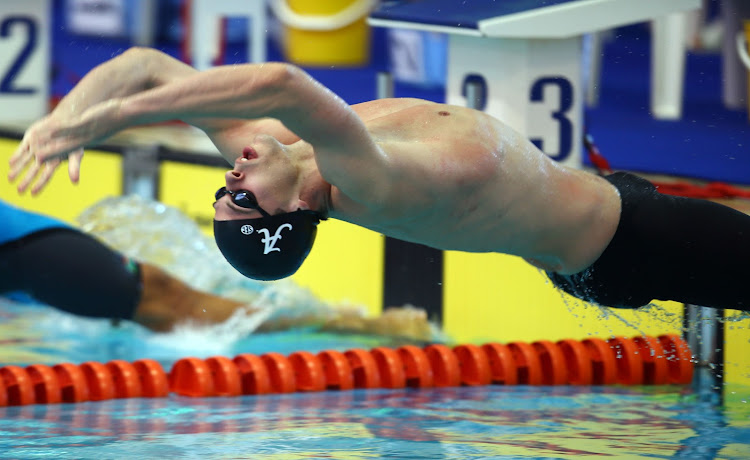 Christopher Reid is ready to return to the international stage as he aims for a spot at the 2020 Olympic Games in Tokyo.
Image: Steve Haag/Gallo Images)

Former Port Elizabeth swimmer Christopher Reid is aiming to get back to his best as he looks to gain a spot on the South Africa team for next year.

Reid, who is based in Tuscaloosa, Alabama, competed at the recent United States of America Swimming Winter Nationals where he bagged two gold medals.

Speaking about his achievements, the 2016 SA Olympian said the meeting in Greensboro, North Carolina was his first race meeting back since April.

“I had no expectations going into the meet. I took a bit of a rest prior to the meet and this competition was a marker for me to see how my training has gone so far.

“I had travelled a lot the day before the competition, and on the first day, I swam exceptionally well and managed to win the 200m IM in a personal best time.

“The next day I swam the 100m backstroke, where I managed to beat a great swimmer in US Olympian in Jacob Pebley, that was incredibly fun too because the field was quite strong.

“I was able to go under 54 seconds in that race for the first time since the Rio Olympics, which was only a shade off my personal best in the event, so I’ll take it, that is progress from where I was,” the Alabama Crimson Tide swimmer explained.

Reid said his main focus had been himself, but also to honour God through his swimming and not focus on what those around him were doing.

“However, heading into this meet, I was mainly focused on myself and honouring God through my swimming, All I was focused on was using my God-given talent and hope that whatever I do is enough,” he added.

He also picked up a silver in the 200m backstroke in a time of 1:58.28, something he was also pleased with given the fact that he had not done much preparation ahead of the events.

“I finished up my NCAA swimming eligibility in May. That was the commencement of my four years swimming for the University of Alabama under scholarship. So on completion of that, I still have one semester of school left,” he added.

Reid said the results he achieved had been very rewarding in that he could see the improvements to his technique and skill levels as a result of his training.

Reid will return to the country in April next year, where he will compete at the South African Nationals and look to qualify for the Fina World Championships later in the year.