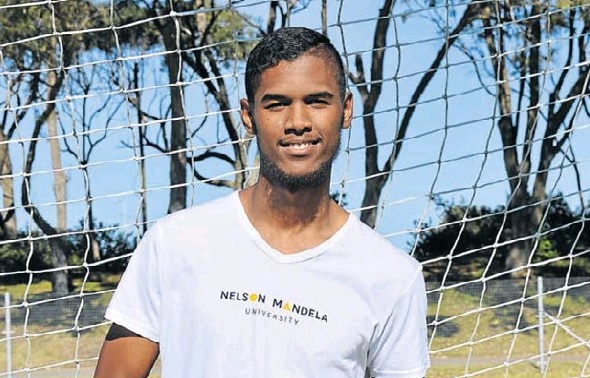 After starring in the Nelson Mandela Bay SAB League this season, Madibaz’s Samuel Connelly will have an important role to play when they contest the ABC Motsepe League football playoffs in Grahamstown tomorrow and Sunday
Image: Brittany Blaauw

The Madibaz are gearing up for a weekend of intense football when they bid to qualify for the ABC Motsepe League in the playoffs in Grahamstown tomorrow and Sunday.

The playoffs will see eight Eastern Cape SAB League regional winners divided into two pools competing at the Grahamstown army base fields, with the winners of each pool earning promotion.

Madibaz, under the guidance of coach Wayne Iveson, won the Nelson Mandela Bay SAB League title for the second year in a row this year and are now focused on moving to a higher level.

“The guys have prepared very well and mentally they are in a better place than last year,” Iveson said.

Madibaz also contested the playoffs last year, but were unable to take the step up and the coach says he believes they will be better for the experience.

“The guys now know what to expect. We have no injuries and we are quietly confident but we also understand that there are no guarantees.

“However, I am expecting good things from the guys this weekend.”

Iveson said there was a positive mood in the camp and that their mental preparation would be the key to their chances of success.

“I believe the most important thing is that we don’t play in fear.

“The players know their roles and functions and we just need to trust our game plan and use our soccer intelligence.

“Mistakes do happen, but the point is not to worry about that and just to go out there to play to the best of your ability. You can’t do any more than that.”

Madibaz Sport Football manager Mark Tommy said there were a number of positives the team could take into the weekend.

“The consistency of the team and the professionalism of the technical staff under Wayne Iveson remain the bedrock of the Madibaz philosophy that advocates the team’s importance above individual glory,” he said.

“The Madibaz’s strategic objective is simply to win the greatest number of games in a season and the next step is the ABC Motsepe League playoffs.”

Tommy also said last year’s outcome in the playoffs would stand the team in good stead.

“Those lessons will pay off as the team are now much more grounded in their success achievement and psychologically more mature to step up to the rigours of promotional playoffs,” he said