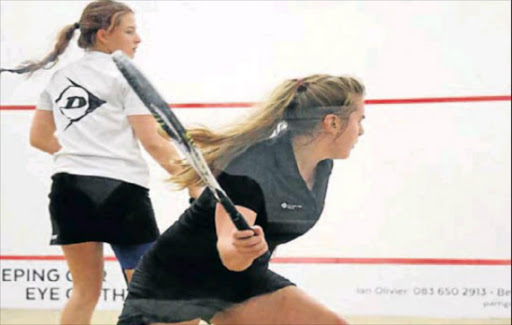 Top seeds Warren Bower and Bianca Brown confirmed their status as tournament favourites, but only after surviving terrific challenges in the Jesters U23 squash finals at Crusaders yesterday.

At the end of a tough three days of competition, the Eastern Cape’s next generation showed there is plenty to look forward to in the sport judging by the talent on display.

Bower and Brown were the last two left standing, but only after they had subdued the courageous challenges of Murray Schepers and Hayley Ward respectively.

Brown, 20, took on NMMU colleague Ward, 19, in the first final in a match which was always going to be a tight affair given their positions of one and two in the varsity team.

Brown made a shaky start as Ward shot out to an 8-2 lead, but in a comeback which perhaps proved telling in the long run, the top seed fought back to win the opening game 11-9.

She lost the second, but went 2-1 ahead after the third game.

Ward was up for the challenge and levelled the match by taking the fourth.

Brown committed the greater number of errors in the decider, but she was able to mix that with a number of winners and eventually a call of stroke against Ward at 9-9 gave her match point, which she duly converted.