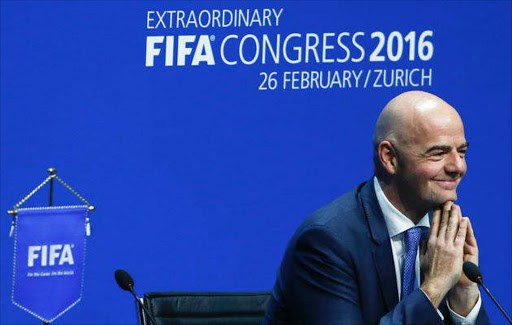 Fifa president Gianni Infantino confirmed yesterday that he backed expanding the World Cup to 48 teams, giving more of a chance to more teams. Infantino believes a fundamental point for an expanded finals would be to have it co-hosted by several countries. He also declared himself quite happy and confident for the future of the scandal-tainted world governing body of football. “Nobody is perfect, I am the last to be. But I don’t steal, I don’t profit, I don’t cheat and I don’t want to allow anyone in this organisation to do so,” he said. Infantino, 46, succeeded the disgraced Sepp Blatter at the head of Fifa, and is determined to stamp his own authority on the job as president and on the spor t’s future. He had already suggested he would be in favour of a 40-team World Cup, up from the current 32. “We can consider a World Cup of 48 teams which would in fact be a 32-team format because we have seen the ideal format is 32 teams,” he explained. “The idea would be that the best 16 teams in qualifying would qualify directly for the group phase.” He confirmed that the 32 other teams would dispute a playoff round from which the winners would enter the next stage to join the other 16 countries. “This gives more chances for more teams. Furthermore, there would be no impact on the football calendar because these playoff matches would be played instead of friendlies before the World Cup." “From the point of view of the promotion of football, there would be 16 ‘finals’ before the real start of the group phase, real matches taking place to determine the 16 teams.” Swiss-Italian lawyer Infantino said the projected increase to 48 teams was “certainly going to be discussed on October 13 and 14 when the next Fifa council meets”. “It’s an idea, just as the World Cup with 40 teams is already on the table with groups of four or five teams.” The suggestion to widen the World Cup to 48 countries is bound to generate mixed emotions. This year’s European Championship in France featured 24 teams in a month-long tournament with just eight countries being eliminated at the end of the first stage. Many argued that the format caused quality to be watered down; others were buoyed by seeing the likes of Wales make the semifinals while Iceland stunned England on their way to the quarterfinals. Away from a new-look World Cup, Infantino said he was also committed to forging a fresh and clean Fifa after a series of corruption scandals since last May. Infantino, who was the right-hand man of suspended Michel Platini in his Uefa career, believes he has the desire and the personnel to put Fifa’s dark days behind them. He underlined the importance of the work “of the new general secretary Fatma Samoura, the development of women’s football and the integration of former players like Zvonimir Boban, assistant secretary- general, and Marco van Basten in the area of technical development”.