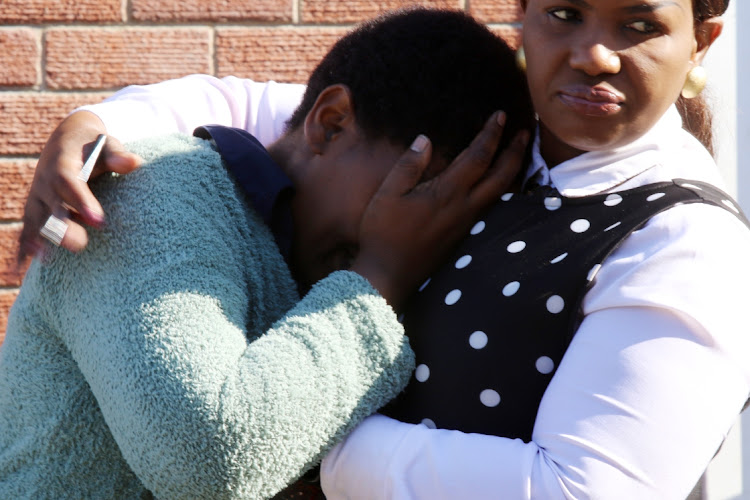 Ntombizonke Mgangala Aunt to one of the Youth that lost their lives at the East London Tavern consoled by Psycho support team member with Minester Bheki Cele, premier Mabuyane and other top officials in East London PICTURE: MICHAEL PINYANA
Image: MICHAEL PINYANA

Family and friends of the 21 young people who died tragically at the Enyobeni Tavern in Scenery Park, East London, on June 26 would most likely have woken up with some hope on Tuesday morning.

It had been more than three weeks since that fateful morning and they — and South Africans — had been waiting to hear the cause of death.

So on Tuesday morning, they — along with Eastern Cape premier Oscar Mabuyane and police minister Bheki Cele — gathered at the Cambridge police hall to be briefed by officials.

Surely, given the nature of gathering all those affected in one place with such fanfare, there would finally be an answer.

The hope turned to consternation and anger when the department of health’s deputy director-general for clinical services, Dr Litha Matiwane, read out a preliminary report.

The report said carbon monoxide and blood-alcohol traces had, so far, been ruled out as the cause of death.

Authorities were now looking at the quantitative results of methanol — toxic alcohol found in industrial solvents, fuels and fertilisers — which was found in the blood samples of all 21 youngsters and this might provide details of what led to the deaths.

The news was not well-received by the traumatised relatives, some of whom started to scream and one, Ntombizonke Mgangala, had to be attended to by emergency medical services officials outside the venue after an emotional breakdown.

Mgangala, whose niece Sinothando Mgangala, 17, was one of the victims, said they had hoped when they were called to the meeting to get the final toxicology results.

“To my surprise, they told us it’s a preliminary report. This means they don’t know what happened to the children.

“That they still do not know what happened is provoking, traumatic and emotional. I battled to stomach the environment, hence I broke down.

“We had questions around their preliminary report. For example, I do not know about methanol and carbon monoxide.

“I still need a dictionary to go through these terms because I do not understand them. Where are the details?”

And the way these traumatised families are now being debriefed is nothing short of an insult.

Instead of grandstanding in front of cameras, Mabuyane, Cele and other officials should have addressed the grieving families in private to explain the findings simply and to prevent the expectation of an outcome.

A statement to the media, in this instance, would have sufficed instead of putting the families through such trauma.

We urge them to put some more thought into how they deal with this tragedy going forward.