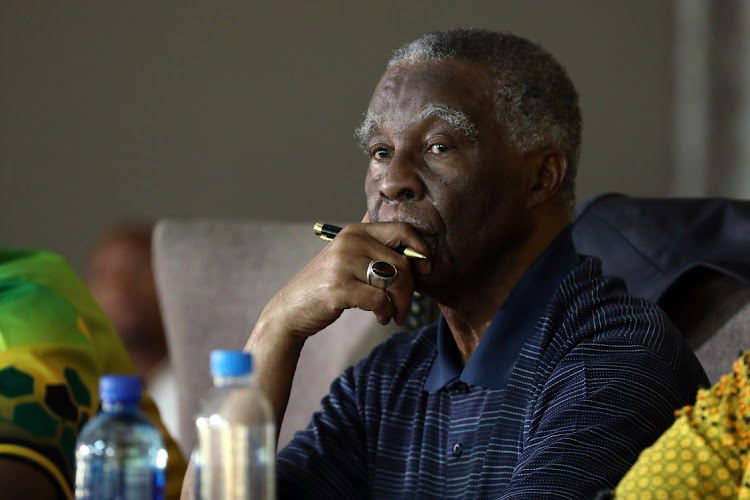 President Thabo Mbeki was not “pushed out” by a benign ANC leadership in September 2008.

He was not removed to hasten the project of improving poor people’s lives.

It is now clear that his ousting was a ruthless, cynical, internal coup d’etat, an upending of SA’s constitutional norms and values.

Those who kicked him out were not interested in deepening democracy or upholding our constitutional principles.

They were intent on gaining raw power, and using it to undermine our democracy and enrich themselves.

They had to remove Mbeki swiftly, brutally, to get their hands on the levers of power.

The usefulness of the state capture report is not just that it identifies the thieves and gives us tools to prosecute those who looted from the state.

It also gives us an opportunity to reflect on our recent history.

It allows us to see just how deeply we were fooled by Jacob Zuma and his cronies.

It opens the curtain and shows us that we were brought to the brink of being a failed state.

Mbeki, despite his faults, was a man who understood very deeply the supremacy of the constitution.

He cared deeply for the country’s institutions even when he disagreed with their interpretation of their role in an evolving democracy.

For this reason, in June 2005 he fired Zuma from the deputy presidency to allow the law to take its course.

Mbeki’s fidelity to and support for the institutions was anathema to the Zuma crew.

To them, institutions and laws exist to do as they — the powerful and the politically connected — wish.

So they fired Mbeki. Zuma smiled and danced, claiming he was a man of the people, as opposed to the “aloof” Mbeki.

He claimed he was bringing a “pro-poor” agenda to government administration.

He claimed he would strengthen institutions.

He went for Mbeki’s fatal weakness, the Aids issue, and committed himself to the fight against that pandemic. We clapped.

In fact what was happening is that we were applauding the overthrowing a man of law by an alleged brazen criminal whose intention was to put his gang in place.

As soon as Zuma was in power he systematically began the process of throwing the constitution into the gutter and stealing, the Zondo reports indicate.

At the same time, he spied on his enemies and attempted to destroy or undermine the country’s institutions, according to the Zondo report.

Nothing illustrates this more clearly than the sections of the Zondo Commission dedicated to the so-called "intelligence agencies" released last week.

The section details shocking theft of monies and incredible acts of criminality on the part of the president and his cronies.

This was not a president. This was a gang leader.

This man did not lead an administration.

He ran a paranoid gang that stole taxpayer monies and spied on opposition parties, journalists, judges, activists and businesspeople, the commission's findings indicate.

So bad was this president that he used the state spying agencies to hound his wife, accusing her of poisoning him, while he siphoned money from the state to keep her in virtual bondage without a criminal trial or legal representation.

In 2016, for example, the so-called Project Mayibuye was given R54m to destabilise the DA and to garner support for the ANC in the Northern and Eastern Cape.

The “project” also put monies towards the destabilisation of the EFF “by exploiting internal divisions”.

Pause and reflect on that: Your money, taxpayer money that is supposed to look after the poor, was used by the president of SA to destabilise the opposition. This is abuse.

This is banana republic stuff. This is what happens in a gangster state.

Under the so-called Project Commitment the then minister of state security, David Mahlobo, delivered a staggering R2.5m in cash every month to Zuma, according to the Zondo Commission.

In 2016, Mahlobo increased the payments to Zuma to R4.5m — yes, every month Zuma received R4.5m in cash from Mahlobo to do as he pleased, the report revealed.

These are just two examples of just how the state was used as a cash cow.

There are so many others you need an entire day to plough through them.

The Zondo revelations give us the opportunity to look at history with new eyes and in new ways.

It explains why the Zuma crowd was so single-minded, impatient, desperate and ruthless in wanting to remove Mbeki.

They did not just deplore his policies.

They wanted to destroy the values and norms that underpinned the democratic state he led.

The events of 2008 were not a change of the guard by a party trying to improve its delivery to the poor, as we have been lied to.

It was a brutal, ruthless, coup by a kleptocratic elite.

Everything that followed demonstrates this.

It’s all there to see in the Zondo reports.