Problem too often the owner, not the dog 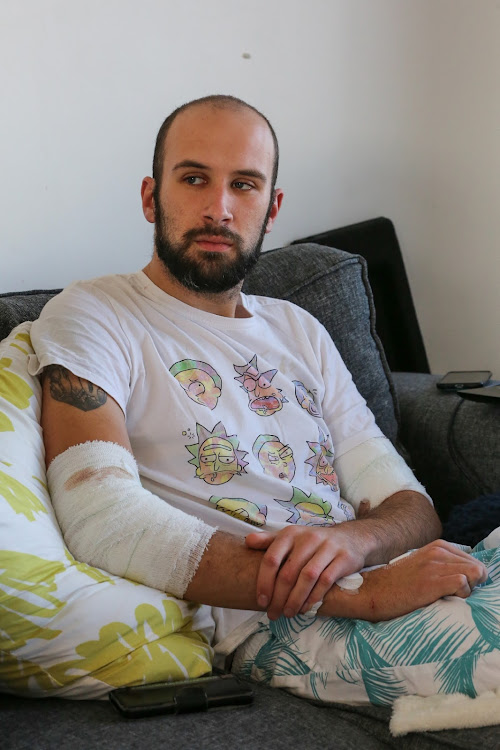 Luke Hardwich is recovering at home after being attacked by pit bulls on Friday afternoon. Two other Sherwood residents were also mauled by the same pack of dogs moments before Hardwich was pulled off his bike while waiting outside his mother-in-law’s complex in Kunene Park.
Image: Werner Hills

Yet another attack on people involving pit bulls.

Just more than a week ago a child had part of her ear ripped off by a pit bull, which also severely injured a woman who bravely jumped in to rescue the 11-year-old girl.

The woman is still in hospital.

A few days later, on Friday, four people were attacked by a pack of  pit bulls outside a residential complex in Sherwood.

In this case, one of the attack victims is facing the terrifying prospect of having a leg amputated as a result of his injuries.

In December, Simamkele Khovu, 3, was mauled to death in a vicious attack by a pit bull.

The family’s neighbour was forced to kill the dog to free the little girl from its powerful jaws.

Sadly, it is incidents such as these that result in the breed being demonised and unfairly labelled aggressive.

But the problem is too often the owner and not the dog.

Pit bulls are far from the monsters they are made out to be.

Unfortunately, attacks by this breed in particular seem to garner more attention.

But in the right homes and hands these canines are just big cuddly lapdogs.

They are highly intelligent and affectionate animals.

The problem is that they are often bought or adopted for the wrong reasons.

And in way too many cases, they are chained, tortured and starved to make them aggressive for use as guard dogs or even the cruel practice of  dog fighting.

Jumping onto a car roof, hiding in a drain and climbing into a stranger’s car.
News
2 weeks ago

A pit bull needs a lot of loving attention, exercise and training.

Like any big dog, they need to be on a leash when out in public and their owners must ensure that the perimeter walls of the property are high enough that the dogs cannot jump over, and  the gates are properly secured at all times.

There are a myriad things that can trigger a dog to attack.

Feeling threatened or still hyped up after being exercised are just two.

Owning a powerful breed of dog is a huge  responsibility.

Before getting one, people need to properly research the breeds and ensure that the dog cannot escape from the property — and that they can control them at all times.