We have an emergency — but where is the urgency? 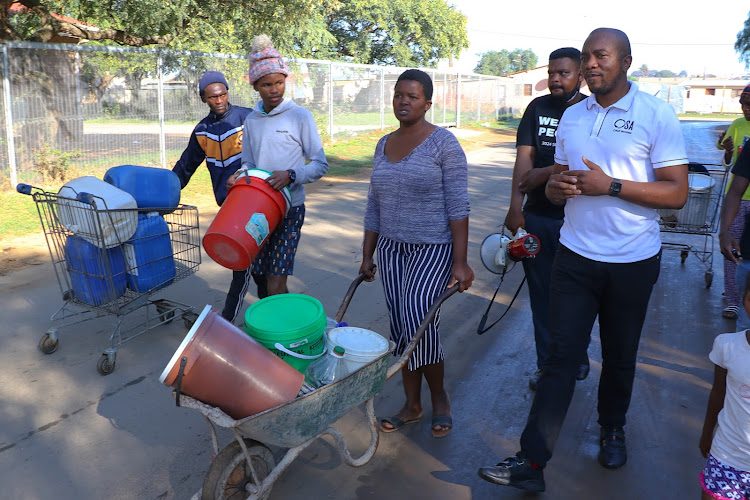 TRUDGING TO TAP: One South Africa leader Mmusi Maimane walks with Ntomboxolo Jantjies and other residents of KwaNobuhle to a communal tap in Hoyana Street. Residents say their taps have been dry for the past three months
Image: RIAAN MARAIS

There is not much time left on the clock, until taps in more than a third of Nelson Mandela Bay potentially run dry.

We face an unprecedented health and humanitarian crisis, an emergency that appears is being treated with little to no sense of urgency — and it local political instability that has brought us to this point.

We have been living under drought conditions for the past seven years, during which the threat of a water crisis has repeatedly been forecast, but critical infrastructure projects have experienced years-long delays, failures of maintenance have resulted in extensive leaks and contaminated water supply, and failure to curb vandalism has damaged vital infrastructure such as water pipelines and pump stations.

Even if rain falls in the catchment areas in the next two weeks and the western dams rise a little above their current record low levels, the crisis remains, because what we are experiencing is not simply a drought crisis.

We have a crisis of water management.

Not enough has been done to secure our existing water supply nor — given the realities drought, decreasing rainfall, climate change and population growth — enough to augment it through additional and alternative water sources.

Even more concerning is that 40% of the metro’s water supply is lost annually to leaks and unauthorised consumption — that equates to 81 megalitres per day (29%) and 30.8 megalitres a day (MLD) respectively that is lost and unbilled, at a cost of over R200m a year.

At the same time as we are being urged to cut consumption from 280 MLD to 230 MLD, actual consumption is under 200 MLD and the rest is being “lost”.

Unless water leaks and losses are addressed, and are seen to be addressed, the municipality’s water-saving messages to residents and business lack integrity and impact.

As much as conserving, reusing, recycling and harnessing alternative sources of water is essential in our water-scarce country, and we do all need to play our part, the current situation is akin to continuously topping up a leaking bucket rather than replacing the bucket.

Repairing water leaks is simply not happening fast enough and the municipality is continually playing catch-up on a moving target of over 3,000 leaks at any one time, while in most weeks more new leaks are reported than existing ones are repaired.

During the same period as a water emergency has been steadily approaching, we have seen a continuously unstable local government, beset by disputes within and between political parties in a battle for positions and control over the metro.

Fingers are pointed, blame is shifted, but there appears to be little accountability nor concern for the residents of Nelson Mandela Bay while politicians squabble and pursue their own agendas, and the bucket continues to spring ever more leaks.

Political interference has undermined officials’ ability to do their job and paralysed administrative processes such as procurement of much-needed maintenance and project services, for example for bringing in contractors on leaks and maintenance.

Council was long overdue in approving the 2021/22 adjustment budget while its committees scarcely meet, meaning decisions can’t be made and officials are unable to spend on critical projects.

The metro was classified as a disaster area almost a year ago, but a full declaration of disaster never happened to unlock resources to assist the Bay, while the classification itself has lapsed.

Meanwhile, the metro has not had a shortage of offers of funding, resources and expert assistance, but the leadership appears to be constrained in accepting offers from National Treasury and the local business community.

For example some manufacturers are willing to use recycled sewerage water for operational processes so as to reduce consumption of Municipal water; while others have offered to assist with water infrastructure repairs and maintenance.

The business sector combined consumes 35% of the Metro’s water supply, and to this end have made significant inroads over the past few years in continuing to reduce their consumption levels. Some have gone off the water grid, while many have installed comprehensive alternative water-saving and treatment solutions.

These efforts alone are not enough. It is not too late for all the stakeholders to pull together and to all play our part in reducing consumption levels, accelerating the fixing of leaks and implementing alternative water supply measures to prevent our taps from running dry.

One business leader told me that he decided to conduct a review of his manufacturing facility and was surprised to find that they had a number of leaks on-site.

So too have similar stories being conveyed by residents in terms of leaks found within their own homes, highlighting that there is more we can all do.

The emergency water crisis plan needs to be widely shared and activated for the areas in the red zone with razor sharp efficiency while also limiting the risk of supplying contaminated water through tankers to these areas.

This is an emergency — now is not the time for political squabbling, strategy games or grandstanding to score points out of a humanitarian crisis.

Nor is it the time to allow offers of assistance and applications for initiatives such as boreholes and water treatment or recycling installations to be tied up in procurement red-tape.

The municipality should be fast-tracking any and all opportunities to avert disaster.

Water supply drying up is a crisis that affects every household and business in the metro, affecting public hygiene and sewerage removal, the ability to perform the most basic of personal functions and maintain business operations, impacting on visitors and tourism and, ultimately, investment and jobs.

And in turn as stakeholders in the metro, we must also take action in the areas where we have control.

Now, more than ever before, this is the time for collaboration and action.