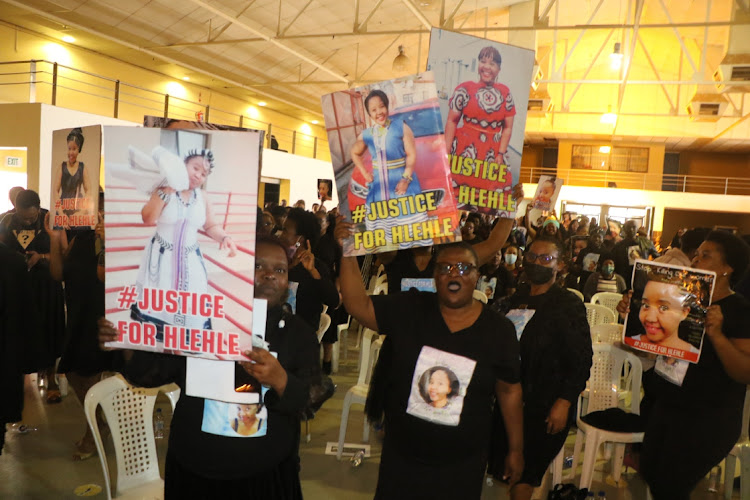 Hundreds of poeple marched through the streets of Mthatha calling for justice for Namhla Mtwa who was shot dead in April 21 as she arrived at her home in Mthatha. The later attended a memorial service in OR Tambo hall on Mthatha. Mtwa wad working for the OR Tambo district municipality The lone gunman pumped nine bullets at her body. picture LULAMILE FENI
Image: LULAMILE FENI

On April 21, Namhla Mtwa was shot nine times in a rental car in the driveway of her home in Mthatha.

No-one has been arrested and the police appear to have had little interest in making a breakthrough.

That is until Mtwa’s sister, Sanga Nozintathu Mtwa, began making a noise on social media about the years of abuse that her slain sister had endured, allegedly at the hands of her partner of 17 years.

She shared screenshots of messages between Mtwa and her partner as well as chilling photographs of her sister’s face and body covered in bruises and marks from sjambok lashes he allegedly meted out.

“My sister was killed on the 21st of April but there is no suspect, no arrest has been made.

“She has been abused for years by a well-known, untouchable man who has connection and power.

“The proof is here, what does the SAPS want? They are waiting for me to be the next victim. We want justice for our beloved sister,” Sanga wrote on social media.

“I need SA to help me find justice for my sister. I need this guy to answer why he [allegedly] did that to my sister ... My sister wanted to leave the relationship but [he allegedly] told us straight into our eyes that he’ll rather kill Namhla than to see her with another man, and a month later my sister died.”

Sanga’s posts were widely shared, leading many people to demand that Mtwa’s partner be arrested, or at least investigated, in connection with her murder.

Eastern Cape provincial commissioner General Nomthetheleli Mene has assured the public that the case is in capable hands and investigators are confident of making a breakthrough.

Why did it take a national outcry before the case received the attention it deserved?

If Sanga is to be believed, all the evidence of abuse has been supplied to the police, but their interest in solving the case was lacklustre at best.

That is, sadly, the experience of many families battling to get justice for their loved ones.

Women are being abused daily by their partners and the justice system, including law enforcement agencies, is letting them down.

Much has been said about the need for specialised courts and hefty sentences for abusers, and for bolstering the police’s capacity to investigate these cases.

But men must also lead the fight against gender-based violence.

Without their active involvement in tackling misogyny and abuse, we will lose more women such as Mtwa.