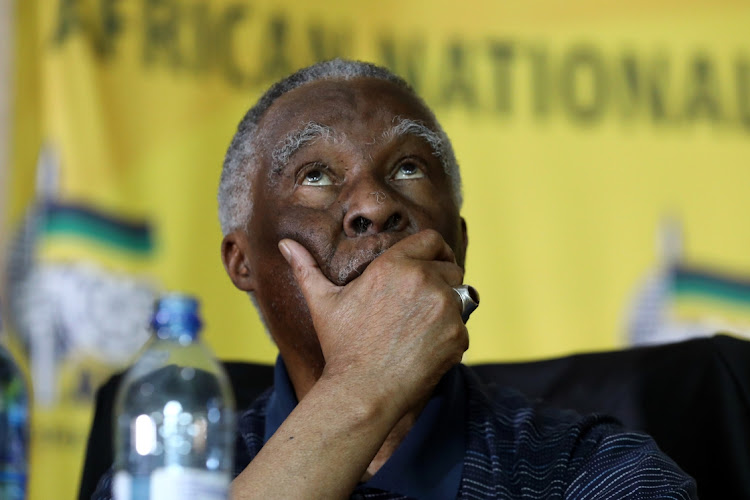 Thabo Mbeki on a two-day visit to ANC structures in the Western Cape in an attempt to resuscitate the party in the province.
Image: Thapelo Morebudi

Former president Thabo Mbeki is probably in the dog box among some ANC members after he challenged them to improve their “capacity to think” if they are to come up with winning solutions to the country’s problems.

“Do we have the strength, the capacity and everything else to discharge that responsibility of the eradication of that [colonial and apartheid] legacy?” he asked.

Mbeki’s language may have been a tad undiplomatic to some, but he is right.

In the face of some of the most challenging problems facing our country and humanity in general, we are sinking under the weight of hoary, old, populist, failed, recycled solutions from the political left, centre and right.

Faced with the challenge to stop, reflect deeply, and come up with new and imaginative solutions, we fall into the laziest, sloppiest, most partisan forms of thinking.

Nothing illustrates our crisis as much as the past week’s events.

The premier of KwaZulu-Natal, Sihle Zikalala, emerged from his slumbers to revive a discredited idea that has been recycled on numerous occasions from within the ruling party whenever its failures are exposed.

Zikalala said in a speech: “We want to issue the call for us to debate whether it is not time to move away from absolute rule by the Constitutional Court to a situation where we have a parliamentary democracy in which the voice of the people who elected is supreme to all other voices.”

We know where this comes from.

Whenever you hear an SA politician attack the constitution and the judiciary, and accuse them of being “bought” or of being some sort of anti-transformation body, then know this: They have run out of ideas on how to make our country a better place or, worse, the long arm of the law is reaching for them.

Why hasn’t the ANC delivered houses, jobs, high-functioning schools and teachers, or water?

Why has land been given to politically connected individuals and not the many ordinary South Africans who wish to work it?

Why are the borders so porous and the home affairs ministry so corrupt?

Why did we support the murderous Omar al-Bashir of Sudan and Robert Mugabe of Zimbabwe?

If you are lazy you will blame the constitution, as Zikalala did. If you are honest, you will realise that it is in huge part because of the ANC leadership’s concentration on lining its own pockets that has set us back so spectacularly.

Zikalala’s “new idea” of doing away with the constitution takes a leaf from the book of the man he helped propel to power in Polokwane in 2007: Former president Jacob Zuma.

The former president was quick to blame judges, the constitution and apartheid for his failures and personal entanglements with the law.

In 2014, Zuma blamed apartheid for rolling blackouts. In 2015, as the economy he had run for six years tanked, he blamed lack of GDP growth on apartheid.

“We are trying to address the legacy of apartheid and it’s going to be with us a long time,” he said.

The truth is that Zikalala and his fellow travellers never really had any new, imaginative, creative ideas about how to use the democratic space to bring about jobs, improve lives and build a better SA.

The one question she still has not answered is this: How did the constitution impede her work in delivering housing or water or in any of the many cabinet portfolios she has held since the late 1990s?

Zikalala’s call is interesting partly because it has garnered plaudits from certain quarters in the ANC and elsewhere in our society.

Those who are calling for a rejection of the constitution have been applauding the strongman tactics of Russia’s Vladimir Putin and his vicious war on Ukraine, for example.

They would like to see a Putin-esque system in place here. None of them mention that the very loud opposition in SA would find themselves in jail in a second if they were in Moscow.

Russian opposition leader Aleksei Navalny, now serving a two-year sentence that ends in 2023, was last week sentenced to a further nine years in a high-security prison on trumped-up charges.

None of SA’s Putin admirers have raised this matter even once.

This “dump the constitution” brigade are like the US’s former president Donald Trump.

After his election in 2016, Trump publicly complimented Putin, even calling him “a genius”.

SA is in trouble; unemployment, inequality, poverty, crime, and hopelessness stare us in the face every day.

As Mbeki indicates, we need serious reflection, brave new ideas, and not the sloganeering we are getting from Zikalala and his fellow travellers.