Chickens have come home to roost 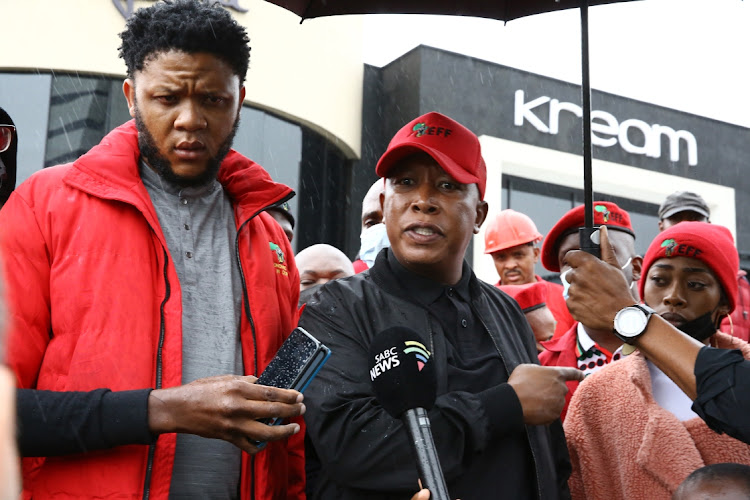 EFF leader Julius Malema visited restaurants in Mall of Africa to check if the ratio between South Africans and foreign nationals is balanced
Image: Thapelo Morebudi

The fake Africanists and revolutionaries of SA politics are marching to restaurants and other establishments acting surprised that there are “millions” of Zimbabweans living and working in this country.

They proclaim that it is an injustice that there are this many of their fellow black Africans working here, as if they do not know how that came about.

Let’s not tell lies here. The Zimbabweans who have braved rivers and human traffickers and corrupt cops and other dangers to finally sell fruit at Bara Taxi Rank or in the Joburg CBD are here because ANC leaders refused to take action against the repressive and economically ruinous anti-black policies of then Zimbabwean president Robert Mugabe for two decades.

Back in the 2000s, when many of us were warning against Mugabe’s undemocratic, kleptocratic, corrupt and economically ignorant actions, we were called — just like SA’s judges are being labelled today — mentally colonised blacks.

When Morgan Tsvangirai, the late opposition leader who was tortured, detained and charged with treason, asked for help in 2008 from his regional neighbours, SA told him to “speak to Mugabe”.

The chickens have come home to roost. When he arrived at restaurant doors last week, EFF leader Julius Malema should at least have acknowledged that he was responsible for the fact that Zimbabweans had fled their ruined country to some semblance of life in SA.

This is because people like Malema aided and abetted Mugabe as he stole from the country and terrorised its people.

In 2010, with millions of Zimbabweans already having fled their country and living in Botswana, SA, Namibia and other parts of the region and the world, Malema told a Zanu-PF Youth rally that Mugabe was a hero because he was “not afraid of imperialists”.

Malema blasted the opposition leader, Tsvangirai, calling him an “ally of western imperialists”.

He said nothing of the fact that land was not returned to ordinary farming Zimbabweans by Mugabe, but given to cronies and relatives such as his wife Grace Mugabe.

Today Malema wonders why there are so many Zimbabweans here.

They fled Malema’s hero and his corruption, political repression and his collapse of the economy.

The ANC, Malema’s alma mater, is squarely responsible for this mess.

Thabo Mbeki, the party’s president from 1997 to 2007, stood by Mugabe even when people such as Tsvangirai were being detained and tortured.

In 2003, Mbeki refused to use SA’s moral authority to speak against Mugabe and rejected sanctioning him and his cronies.

At the time, Zimbabwe imported 40% of its electricity from SA.

“If we said, ‘Switch off the lights,’ to that 40% extent, you produce a worse situation in Zimbabwe and you have a million Zimbabweans crossing the border to us.

“Is that the outcome we want? Of course it’s not.”

His silence and coddling of Mugabe got us what exactly? The thousands, perhaps “millions” of Zimbabweans “crossing the border to us”.

In Southern Africa, only Botswana’s former leader Ian Khama had the courage to speak up.

In 2016, he told Reuters: “It is obvious that at his (Mugabe’s) age and the state Zimbabwe is in, he’s not really able to provide the leadership that could get it out of its predicament.”

The ANC consistently supported Mugabe; its leadership lauded the failed leader for decades, giving him standing ovations at inaugurations.

The Zimbabweans, meanwhile, were voting with their feet and coming to SA.

Ordinary South Africans tried to send a message to the government to stop supporting Mugabe.

When the kleptocrat bought arms from China in 2008 it was SA harbour workers in Durban who refused to allow the weapons to be unloaded from the Chinese ship An Yue Jiang.

These workers then mobilised the entire region’s dock workers not to unload the weapons.

The SA government did nothing.

When Mugabe insulted Lindiwe Zulu, SA’s envoy to Zimbabwe, the government and the ANC did nothing.

Worse still, the SA government did nothing to secure SA’s borders or to improve the working of the department of home affairs.

The political, ethical and moral failures of the ANC over 20 years, coupled with the flip-flopping of the likes of Malema, are the reason we are in this sorry situation today.

Anyone who thinks that attacking foreigners, raiding businesses and pretending to be radical will solve our problems is being naive.

The truth is that the ANC cannot be bothered to do the hard work of thinking about what its policies would do to the country over the next 20 years.

Our current politicians cannot be bothered to think about what their utterances, actions and policies will do to the country over the next 10 or 15 years either. It’s a race to the bottom.