We know who failed us, Sisulu, and it wasn’t the judges 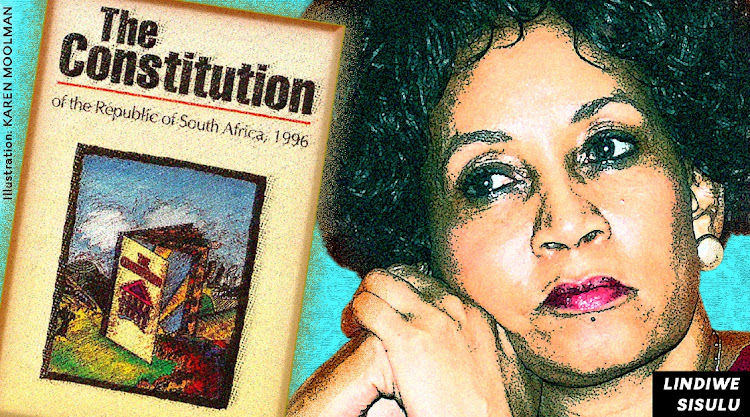 Lindiwe Sisulu, took aim at her own Government, with her scathing article in an op ed on the IOL website. She criticised the Judiciary and in so doing spoke out against the Constitution.
Image: Karen Moolman

South Africans should be grateful to politicians such as Lindiwe Sisulu.

Why? Well, the minister’s attack on the judiciary last week, and her vulgar attempt to blame the constitution for her party’s failures to transform the country, unmasks her and those who support her.

We can all see what she stands for.

Her article is yet another illustration to the people of this country that the party of liberation is actually the party of a small, kleptocratic, elite that fears accountability.

Sisulu’s diatribe, so full of insult and innuendo but free of fact or corroboration, reads like something penned by a Zanu-PF apparatchik.

The first great thing about Sisulu’s piece is that it illustrates the sheer lack of maturity of many leaders of our governing party.

Not once does she stop and say perhaps it is worth mentioning that the ANC has been in power for a full 28 years.

Many of us freely acknowledge that the legacy of apartheid was not going to be reversed in just 30 years, but a humble and simple acknowledgment that in those three decades the ANC has failed to show significant progress (because of its own executive failures) would be nice.

Not from Sisulu, though.

Instead, she starts off by blaming judges in the most vulgar terms, calling them “mentally colonised” and using the vile insult of “house negroes”.

Nowhere in the world where civilised discourse takes place is this expression even used.

Yet, what can you expect?

In the absence of facts to back up her attack, labelling and insult are the only weapon left to her.

We should be grateful for her labelling. She is unmasking herself.

The people of SA can see that there are no solutions here, only insults and the blame game.

Then there is her general attitude towards the voter.

Sisulu and her reactionary followers are apoplectic that she is being criticised for the crude language she used in her baseless attack on the constitution, claiming she is being targeted.

Her response and that of her ministerial team, particularly when she was tackled about the plagiarism claims against her, shows that Sisulu thinks that South Africans are her subjects.

We are there to be lectured and insulted by her and the judges, the acting chief justice, and others should take it lying down.

She is deluded. We are not subjects. We are citizens of a free and democratic SA. We know who failed us.

The same movement that was custodian of our hopes and dreams has betrayed us.

What, exactly, does she want from the constitution and the judges who interpret it?

It seems that she is asking for a country where her ANC (the one she was speaking for in her articles, not the one that justice minister Ronald Lamola has so elegantly defended) is free to do whatever it wants without citizens’ recourse to an impartial higher authority — the constitution and the courts which interpret it.

She is against the rule of law.

That would explain why one of her supporters, Mzwanele Manyi, tweeted this week that “constitutional democracy is a wrong model for South Africa”.

What, pray tell, is their alternative to our constitutional democracy?

The dictatorship that so many among her followers seem enamoured with?

This constitution forced the government to roll out HIV drugs to poor South Africans who were left stranded by the executive (in which Sisulu enthusiastically served) in the 2000s.

This same constitution has stood up for the children that Sisulu and her fellow ANC leaders have left to use pit latrines — and die in them.

In the period since 1994, the ANC has enjoyed a two-thirds majority (in 2004) or had the support of other parties to change the constitution.

Why, one may ask, didn’t the ANC change it if it is indeed so bad?

There is no need to wonder too much about that.

There are two reasons why Sisulu has not piped up until now.

First, she wants the ANC presidency.

But why insult judges and fib about the constitution to get there?

Second, her faction of the ANC wants to shift the blame for its failures of 30 years by tarnishing the judiciary and the constitution.

Voters will not be fooled.

Sisulu has let her mask slip.

What she is showing us is what her faction of the party wants — a leadership which is not held accountable by a people’s constitution or independent judges.

It is on this basis that both she and the ANC must be judged in 2024.

When people show you who they are, believe them.