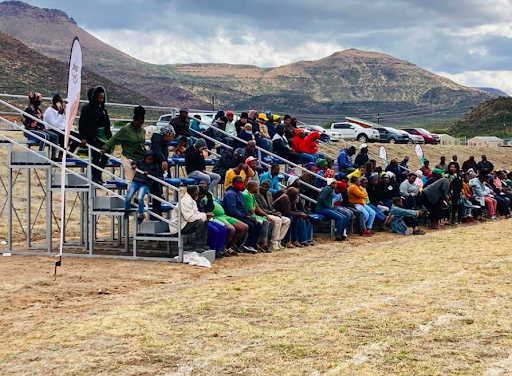 A now-deleted post shared by the Enoch Mgijima local municipality showing ANC officials cutting the ribbon as members of the community can be seen seated on the side.
Image: Screenshot

The official handover in an impoverished corner of this province of a substandard sports facility that carries a multimillion-rand price tag  justifiably occasioned much outrage, not just in the Eastern Cape but across the country.

The Enoch Mgijima Local Municipality initially trumpeted that it was officially handing over what it termed a stadium in Lesseyton.

To add insult to injury, some councillors attended the event decked out in ANC regalia.

The handover was intended to demonstrate the benefits ANC councillors were bringing to the area but the stunt backfired badly, with social media erupting over the council having lavished R15m on some basic spectator stands, white-washed lines painted on a dusty pitch and ablution blocks.

Apparently, the expenditure also covered some invisibles such as septic tanks, borehole drilling and security facilities.

Still hardly the stuff of R15m. And the council is planning to spend a further R7m to expand the facility.

In the wake of the fallout over what certainly appears to be absurd expenditure, co-operative governance and traditional affairs MEC Xolile Nqatha, rightly, has demanded a full report from the local authority and warned there will be grave consequences if correct procedures were not followed.

For once, the ANC itself has been stung into action, with the party’s provincial executive committee and the regional leadership in the Chris Hani district calling for a forensic investigation.

Other political parties, predictably, have shrilly condemned the waste of money and blamed the ruling party for the debacle.

It is hard to understand just what the council was thinking when they okayed spending more than R20m on these sports fields in an area that desperately needs basic services such as a reliable water supply and usable roads.

At best, they have their priorities wrong; at worst it may be yet another of those fruitless and wasteful, if not fraudulent, spending sprees that frequently occur at local government level.

Enoch Mgijima is not alone in its folly. Across our province there are far too many “project expireds” where large sums of money were thoughtlessly spent only for a facility to fall into disuse or even not be completed at all.

Scratch the surface of many municipalities’ grand plans and substandard work, and dodgy tender awards and waste is to be found.

Meanwhile, far too many many communities live in unacceptable conditions with inadequate sewerage, regular electricity outages and lack of a basic water supply, not to mention a dire shortage of decent housing and the plague of potholed roads.

We can but hope that the coming polls will return local representatives who have residents’ interests at heart and get their priorities straight.