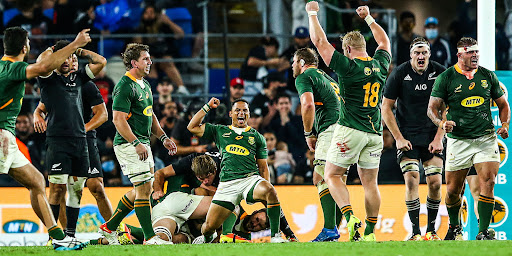 After an unsuccessful attempt to defend their Rugby Championship crown, the Springboks have an opportunity to press the reset button ahead of a three-match European tour in November.

After the high of a series win over the British & Irish Lions, the world champions were brought back to earth in Australia, where they came up short against the Wallabies and All Blacks.

The Boks did, however, have the satisfaction of winning a tense dead rubber game against the All Blacks in their final outing and this lifted spirits after three successive defeats.

It also gave the Boks some much-needed momentum, which will ease the pain of earlier setbacks.

The Boks will have an opportunity to make a fresh start in the Autumn Nations Series against Wales, Scotland and England.

In the Rugby Championship, where they suffered two last-gasp defeats, the Boks’ reliance on going to the boot did not always produce the desired results.

He said if the Boks’ opponents loaded the front line with 14 defenders, and only had one player at the back, then space would probably be at the back.

According to Nienaber, the Boks were then forced to go to the boot to get into vacant space.

The Bok mentor says the upcoming tour will offer the Boks another valuable opportunity to develop their playing base.

He feels the Boks are still growing and are not where they were as a team in 2019 when they won the World Cup in Japan.

Not playing in 2020 because of the Covid-19 pandemic stunted the Boks’ growth and had an impact in how they fared when they returned to action, he says.

After the challenges of 10 Test matches in 2021 in a trying bio bubble environment, the Boks have a welcome opportunity to regroup before a challenging trip to the northern hemisphere.

With the 2023 World Cup in France approaching, the Boks may adopt a more experimental approach to selection in Europe than they did in the Rugby Championship.