How about an apology to waterless Port Alfred residents? 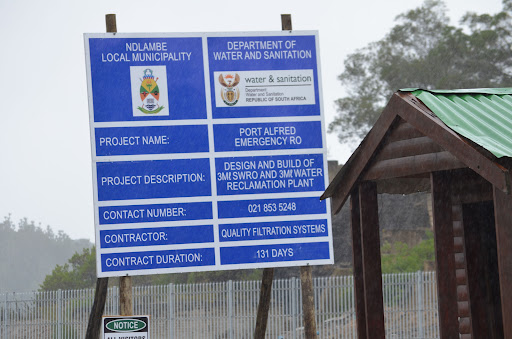 CLOGGED UP: The site of the salt water and waste water reverse osmosis plants at Port Alfred 7km up the Kowie River
Image: JOHN HOUZET

While the Ndlambe municipality celebrated with much fanfare the first 100ML of water delivered by a salt water reverse osmosis plant a few weeks ago, residents in the high-lying areas of Port Alfred were fuming because they still had no municipal water.

Some have had no water since November, others since January.

According to the municipality, the salt water plant’s filtration system is clogging up, which is why it is not producing the two megalitres a day it is supposed to.

There appear to be issues with both treatment plants being developed in Port Alfred, which together are supposed to produce five-million litres of fresh water a day.

The municipality says work is being finalised on the R22.6m waste water reverse osmosis plant, which should produce 3ML of water a day.

But apparently the sewage volume required to meet the contracted output is not available.

Concerned residents’ groups want to know why these challenges, which they say can be fixed, were not considered before the projects were approved and why a proposed seawater desalination plant, to be built at the developer’s own expense, was ignored for more than a year by the municipality.

“Thousands of people still have no access to water unless they queue up at the tanks in the town,” Port Alfred resident Mike Verala said.

He said the emergency waiver granted to undertake the salt water and waste water reverse osmosis plants would have been acceptable had it delivered an emergency solution.

The comment by the municipal spokesperson that though the one-million litres celebrated by the contractor should have been more, it was a million litres the Port Alfred residents would not have had if the salt water project not been done, is incredibly insensitive.

To pat yourself on the back because some people have water while others who have already been without for months are still sitting with dry taps is just not on.

A bit of humility accompanied by an apology to the long-suffering residents as well as an immediate plan of action and the cancellation of the water availability tariffs for those who don’t have this resource would go a long way in assuaging the townspeople’s anger and frustration.