We need to work together to solve SA’s problems 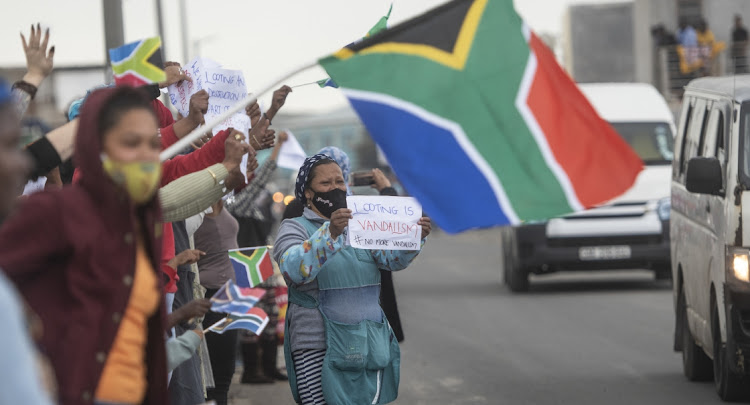 Amid  the riots and looting  that followed the arrest of former president Jacob Zuma, it is reassuring that so many people are now taking a stand to prevent further destruction.

Besides the antipathy expressed for the opportunistic looting, what these citizens’ statements appear to say is that destructive protest is self-defeating.

This is one of the themes of a “mindset change” feature that is part of a multi-sector collaborative local social transformation process we have been advocating to help regions   in conflict due to inequality in SA.

It is what is needed to move SA forward in ways that recognise the need for the sustainability of businesses and the grievances of communities.

The “trickle down” of economic fortunes to community levels has been very limited in SA and consequently the socioeconomic disparities have taken on severe proportions despite some progress in the democratic period.

Together with acute socioeconomic inequality, the failure of local government to render required services to  communities has generated frustration and anger, prompting activist leaders of grass-roots organisations to adopt an aggressive strategy, as has been seen in outbreaks of violent protest  and xenophobic attacks.

In the Sundays River Valley in the Eastern Cape, the initial reaction to frustrating inequality in 2014 was to start with the burning down of municipal offices.

This did not solve the problem and the frustration and anger was not removed.

Thus, by 2018 Sanco had shifted its focus to the farms and packhouses, the vital economic hubs in the area; they started burning down farm sheds to get their point across in a dispute about wages.

To put the Sundays River Valley story in perspective, the citrus-producing valley has experienced a period of exceptional economic success over the past  decade or so.

This is surely due to both the exceptional expertise of the farmers and the labour of workers from surrounding communities as well as a good proportion of seasonal workers who descend on the valley every picking season.

A fragile truce was achieved in 2018 but, again, the underlying problem was not solved.

In 2019, an externally facilitated process started that soon culminated in the formation of the Sundays River Valley Collaborative.

An initial focus on building the capacity of community leadership morphed into a multi-sector collaborative development process that includes a mindset-change feature that enabled  activist leaders to come to the realisation that destructive protest did not solve the problem of acute inequality.

The mindset change means, among other things, that for disgruntled farmworkers to scare farmers off farms or burn  down sheds, packhouses and farms is ultimately self-defeating because it means destroying one’s own livelihood.

Similarly, destroying  shopping malls, trucks and so on does not solve any problems but instead destroys the jobs and livelihoods of  people in local communities.

But let us not misread the context: there are serious issues about which to be justifiably upset, frustrated  and angry.

We are a deeply unequal society, and many people have good reason to feel aggrieved about their quality of life. This is the big problem that we must solve.

It is what can be called a structural problem: the unequal patterns by which wealth, assets and opportunities are distributed.

One way of looking at it is to focus on three interrelated problems.

The first is the one stated above. The second and related problem is in the realm of ideas, strategies  and plans: we  simply do not have a coherent plan with sufficient consensus that it could be effectively implemented to solve this structural problem.

Instead, we have pseudo positions and disagreements on an ideological level that  often  shroud self-interest  and factional contests.

The third problem is that we do not agree with one another about who should be the primary agency to address the problem.

By now it is no secret that the state cannot do it on its own and therefore we need to do it through the means of collaborative development and within the parameters of the law.

It is imperative that we  work together to achieve inclusive wellbeing, because it is in everyone’s interest that all South Africans experience a reasonable quality of life.

Despite the ideologies of revolution, it is time we wake up to the reality that the problems will not be solved by rioting and destruction; it will only make the problem worse.

The work being done in the Sundays River Valley is an example of multi-sector collaborative development.

It is about every sector of society taking co-ownership of development and overcoming the unrealistic notion that the state can be the only agency to make development happen.

Perhaps the extent of the destruction of the Zuma riots will enable us to learn, accept and understand that there are better ways of making the world aware of one’s grievances and solving problems.

● Prof Deon Pretorius is affiliated to the Department of Development Studies at the Nelson Mandela University and is the managing director at Development Partners. He writes in his personal capacity