Municipal petrol theft not a gas 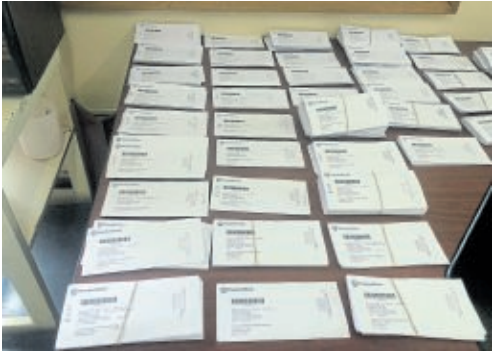 PAPER TRAIL: Boxes of receipts for the purchase of fuel for municipal vehicles which be manually added to an Excel document
Image: Supplied

Almost R20,000 worth of petrol obtained illegally through the use of the municipality’s petrol cards.

Not a huge amount in the greater scheme of things, but these are only fairly recent transactions that were flagged.

Who knows what a proper investigation will reveal?

The petrol stations the cards were used at, in July, are in Kwazakhele, North End, Kabega Park and Deal Party.

In the instances, which happened in May, the vehicle linked to the petrol card that was used was in for repairs at the time.

This matter was investigated by the municipality and a case of theft  opened at the Humewood police station.

Small amounts add up over time and every rand stolen in cash or goods affects service delivery.

The problem appears to be that the municipality is still using the archaic pen-and-paper method of recording transactions rather than a more efficient electronic system, despite warnings that the use of petrol cards is open to abuse and leaves the metro vulnerable to potential fraud.

In January, Afrirent was given a contract to fuel the municipal fleet, with the contract due to expire in June.

The contract was then extended on June 1 for no more than a year.

The company issued the municipality with 1,700 petrol cards for its fleet and 15 bulk cards for miscellaneous use.

Knoetze said the manual capturing and verification of the transactions was time-consuming and prone to mistakes and a new system was needed.

She also highlighted that there was nothing fitted to the vehicles to ensure that those linked to the petrol cards were the ones actually being filled with fuel.

It is poor form that the municipality does not yet have a proper system to eliminate the fraudulent use of these cards.

The current way of doing things is ripe for abuse by the unscrupulous — as has been proved —and the metro can ill afford to lose its scant funds to crooks.

The people need services and the leaders of our city have a duty to ensure that its money is well looked after.