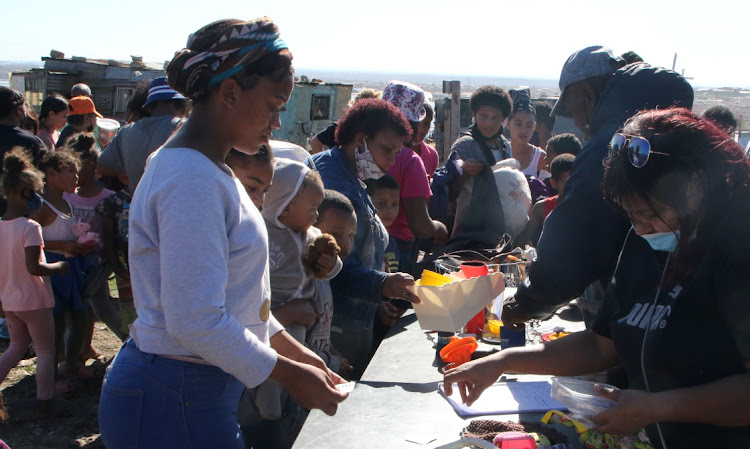 FAIR TRADE: Members of Move One Million trade tokens earned with members of the community for items such as winter clothes, building materials, food and blankets
Image: FREDLIN ADRIAAN

What a brilliant concept the Move One Million (M1M) movement has come up with in Gqeberha.

The idea of people earning tokens in return for things they do in the community such as picking up, bagging and dumping litter, and then exchanging the tokens for things they need at a market day, is one worth supporting.

The project, initiated in an informal settlement next to Windvogel, has proven a huge success and has given residents purpose, pride and dignity.

The products they can exchange their tokens for include household items, toys, plants, clothing and food.

The M1M  movement adopted the informal settlement towards the end of 2020, when it introduced the tokens project with the aim of helping the residents to become self-sufficient.

And that is exactly what it is doing. It is also restoring the dignity of people who have nothing and have been forced to rely on handouts.

Earning tokens for doing things that make the area they live in a better and cleaner place engenders a sense of accomplishment and pride.

It also restores hope in those who had none.

Earlier in 2021, more than 30 children received school uniforms and stationery.

For each black bag filled with rubbish that was dumped, they received one token from M1M.

Five tokens got them a school pack comprising a shirt, pants or skirt, a bag packed with stationary and a lunch box and cool drink bottle.

“This is not a charity concept,” M1M provincial co-ordinator Bridgette Pieterse said.

The cost of the market items vary, but none costs more than 10 tokens.

The project has been overwhelmingly welcomed by the informal settlement residents.

Young father Riaan Whiteboy said: “They [M1M] do not only feed the community and leave.

“They teach people to be responsible residents — and that is a good thing.”

Cape Town-based M1M founder Jarette Petzer said:  “This is probably one of the best successes to come out of the organisation because of the mindset shift we can see.

“I am very impressed. We are looking at using what they do here as a blueprint for the organisation nationally.”

Hopefully, the success of the Windvogel informal settlement initiative will spur companies and residents to give it the support it needs to expand to other areas.