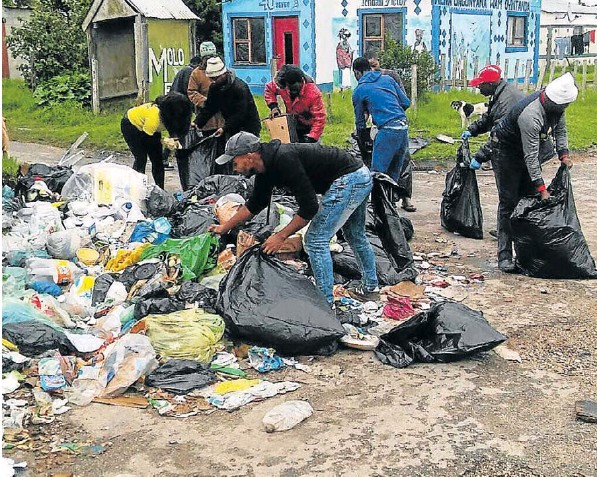 It is always inspiring to the human spirit when one sees or hears about good deeds by people who endeavour to lift others.

That was my feeling after a walkabout among the most depressed sections of our metro, at the invitation of Siya Makwabe, a social activist operating in Walmer Township.

This revelation occurred when I entered the wooden structure in the rubbish-strewn, dusty and raw sewage-spilling streets of G-West in Mpukane Street.

There I saw the constructive and fruitful deeds of people who work with nothing but have huge hearts to do good for others.

There, I came across what I could call the contextualisation of the story of the biblical Good Samaritan.

The building is home to the New Holy Saviour, under Bishop Mathews Ntshinga and his wife Maggie.

The premises is used as a crèche, preschool, aftercare and a soup kitchen for needy people in the area.

I was fascinated to hear about what their Buyelekhaya Centre was all about and what landed them in this sometimes thankless work.

They told me they started the project to feed needy children who dropped out of school due to lack of food and not being able to afford school fees and uniforms because their parents were unemployed.

According to Maggie, most of the children were found at the nearby tip, where they were foraging for something to eat from whatever they could lay their hands on, just to survive.

Some of the children never even started school due to the fact that they did not have birth certificates.

I was told that there were children who had parents who themselves had never been officially registered at birth.

This makes them live outside the national statistics of the country.

Without the relevant documents, they cannot access any of the available state grants and relief funding from the government.

Maggie’s own story is fascinating.

She told me that in the early 1980s, she was walking around looking for work.

One, day close to the airport, she came across a lot of children playing in a garden and she joked and talked to them.

They invited her into the premises and opened the gate, she entered and started to play with them.

The premises were the ACVV (Afrikaanse Christelike Vroue Vereniging) centre.

That day, the staff and management were having a meeting.

One of the visitors called Maggie into the kitchen to come and assist with making tea and coffee.

She ended up washing dishes, and was given bus fare and told to come back the next day.

Maggie says that episode changed her life in that moment.

At the ACVV, she observed and learnt everything that she was going to do in her own community.

The ACVV is a non-profit and welfare organisation, formed in 1904 by Afrikaner women to alleviate the suffering of people caused by the Anglo-Boer War (South African War) of 1899 to 1902.

This movement grew and expanded throughout the country from 1904 to this day.

Seeing how young, old, destitute and poor people were catered for through the use and services of social workers, Maggie started to run her own parallel small-scale, unregistered welfare social scheme from her home.

All that was done after working hours. Maggie knows the process of registering unregistered people like the back of her hand.

In some instances, they have to go back to the clinic, hospital, or school where they were born or started school.

Sometimes the school or clinic does not exists any more.

With the help of qualified social workers, Maggie and the centre’s staff  take them to home affairs and finally get them registered after a tedious, lengthy exercise.

From there, some might qualify for social development grants.

Initially, Maggie was assisted by her husband and children.

They managed to get many of the children off the tip and provide them with food, school uniforms and schooling.

And in some instances reunite the children with their parents.

Maggie struggled to name all of those who had subsequently graduated from the tip to be responsible managers in formal and big corporations.

Some of the boys who did not have parents were sent by Maggie to the bush for circumcision.

In many cases, they literally assisted children from the tip to school, to adulthood, to marriage and, in some cases, to responsible parenthood.

The entire staff speak with pride when they list the number of their shining cases, especially those who started schooling and completed high school and tertiary education.

Bishop Ntshinga and Maggie are mindful that they were able to realise their dreams due to the assistance of numerous people of goodwill.

They count, among others, the Taverner family, who own the Tavcor dealership, Love Story, Luke Watson, Shoprite, Jam Projects and many other individuals.

The list also includes the care and guidance of Glenda Brunette, popularly known as Mam Tshawe.

The bishop and Maggie are themselves shining examples of the significant difference ordinary people can make in the lives of those in need and a guiding light for all residents of our city as to what is possible.