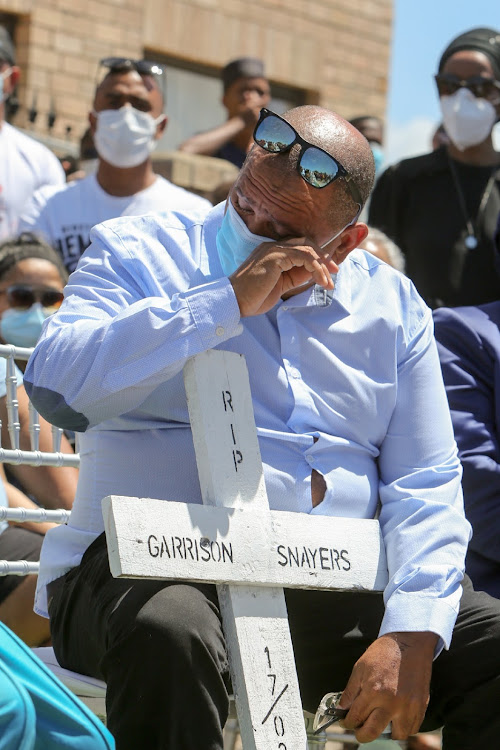 A FATHER’S SORROW: Garreth Snayers weeps while he holds a cross at the scene where his son Garrison was shot dead
Image: WERNER HILLS

Communities in Nelson Mandela Bay are in the vice-grip of criminals. Every week, this newspaper reports on murders, hijackings, attempted murders, robberies, assaults, you name it. And with every criminal act, it is clear that criminals are becoming more brazen, even outsmarting law enforcement at nearly every turn.

Garrison Snayers, an aspirant police officer and dedicated father or two young children, was found slumped over the steering wheel.

This was one of several attacks on e-hailing drivers in recent weeks, with even online shopping delivery vehicles targeted by criminals.

A 28-year-old operator for Bolt said he was held at gunpoint in New Brighton late last year when his so-called passenger turned out to be a robber.

On February 14, an e-hailing driver was held at gunpoint and hijacked, allegedly by a passenger,after picking up two people in Walmer Boulevard.

He had been en route to Greenacres when one of the passengers allegedly pointed a firearm at him and instructed him to drive towards Sunridge Park.

In an earlier incident, on February 4, another driver parked his Suzuki Celerio in Mahambehlala Street, Kwazakele, when a suspect approached the car and tried to grab his keys out of the ignition.

A scuffle ensued and a second suspect opened the passenger door and used a stun gun on the driver, forcing him out of the vehicle.

The driver fled on foot and the suspects allegedly drove off in his vehicle.

All of these incidents highlight the need for improved safety measures for e-hailing and delivery vehicles, but also for communities in general.

On Sunday, family members and friends, along with some Uber and Bolt drivers, drove in convoy from Gelvandale to Madala Street, where a wreath-laying ceremony was held at the scene where Snayers was murdered.

Some New Brighton residents gathered in the street in support of Snayers’ family, who are living in absolute fear.

The owners of e-hailing services need to put in place better safety measures to safeguard their drivers, as they do with passengers. There cannot be no-go areas in the city.

While it is necessary for increased policing in the area, it is important for communities to come together to form policing forums and alienate criminals from their areas.

The police cannot do it on their own; it needs a co-ordinated approach from all spheres of society working together to take back control of the city.