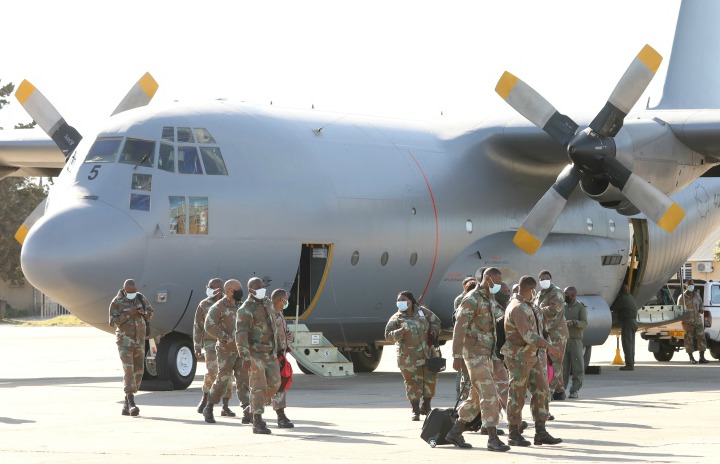 HERE COME THE CALVARY: SANDF medics arrive in Port Elizabeth at the weekend to help in the fight against Covid-19 in the province
Image: FREDLIN ADRIAAN

No sooner had Eastern Cape premier Oscar Mabuyane sent an SOS to president Cyril Ramaphosa than the cavalry arrived.

Admitting for the first time that the province’s health department was struggling to cope with the surge of confirmed Covid-19 cases, Mabuyane said on Tuesday last week he had requested that SA National Defence Force medical staff be deployed in the Eastern Cape.

More than 30,000 people in the province have already tested positive for Covid-19 and the death toll has exceeded 500.

On Sunday, more than 50 SANDF medics arrived in the Eastern Cape to bolster medical care in a stretched and chaotic public health-care system.

SA Military Health Services surgeon-general Zola Dabula said it had been expected that the military would need to assist given the rise in Covid-19 infections in the province, especially among health-care workers.

“The expectation is that, even as the pandemic gallops away, we still have not reached the apex and, consequently, the military will be required to give a hand,” Dabula said.

Over the past few weeks, horror stories about public health-care in the province have played out in the media.

At Dora Nginza Hospital, expectant mothers were waiting for up to 16 days for C-sections and family members had to provide food as staff embarked on a go-slow.

Across town, Livingstone Hospital’s passages were strewn with rubbish, bloodied bed sheets were not cleaned and a report showed that screening protocols were not being adequately followed.

These are just two examples of how the province’s failed health system has made it even harder to deal with the devastation caused by Covid-19. There are many more.

And it is not the first time we are being made aware of the challenges.

Though the military intervention is welcome, one has to ask why was it not requested sooner.