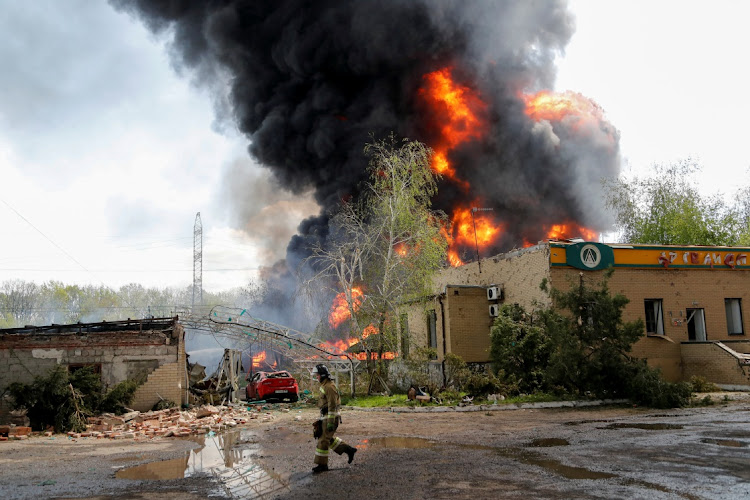 Smoke rises above a burning oil storage in the course of Ukraine-Russia conflict on the outskirts of Donetsk, Ukraine May 4, 2022.
Image: REUTERS/Alexander Ermochenko

Conflict, extreme weather and economic shocks increased the number of people facing a severe lack of food by a fifth to 193 million last year and the Ukraine war means the outlook will worsen without urgent action, a UN agency said on Tuesday.

The Global Network Against Food Crises, set up by the United Nations and the European Union, said in its annual report that the number of people facing acute food insecurity and requiring urgent, life-saving food assistance had nearly doubled in the six years since 2016 when it began tracking it.

“The outlook moving forward is not good. If more is not done to support rural communities, the scale of the devastation in terms of hunger and lost livelihoods will be appalling,” the GNAFC report said.

“Urgent humanitarian action is needed on a massive scale to prevent that from happening.”

Defined as any lack of food that threatens lives, livelihoods or both, acute food insecurity at crisis levels or worse grew by 40 million people, or 20%, last year.

In Ethiopia, South Sudan, southern Madagascar and Yemen, some 570,000 people — 571% more than in 2016 — were in the most severe or “catastrophe” phase of food insecurity, requiring urgent action to avert widespread collapse of livelihoods, starvation and death.

In 2021, Somalia got more than 90% of its wheat from Russia and Ukraine, the Democratic Republic of the Congo received 80%, while Madagascar imported 70% of the food staple from the two countries.

“Countries already coping with high levels of acute hunger are particularly vulnerable to (the war) due to their high dependency on imports of food and (their) vulnerability to global food price shocks,” the report said.