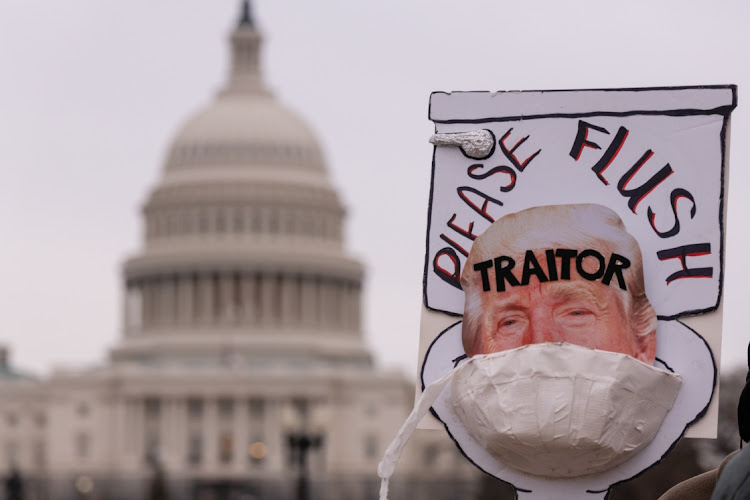 A person holds a sign depicting former US President Trump during a vigil hosted by Declaration for American Democracy on the first anniversary of the deadly insurrection at the US Capitol in Washington, DC, US, on Thursday, January 6, 2022.
Image: Eric Lee/Bloomberg

President Joe Biden used the first anniversary of the January 6 assault on the US Capitol on Thursday to urge Americans to protect the country's fragile democracy by standing up for the right to vote.

Biden, in remarks from the Capitol's National Statuary Hall, lambasted former President Donald Trump for spreading mistruths that fuelled the deadly attack by the Republican's supporters two weeks before Biden's inauguration in 2021.

Speaking 10 months before the November midterm elections that could give control of one or both houses of Congress to Republicans, Biden, a Democrat, warned that the danger on display a year ago had not gone away.

“The lies that drove the anger and madness we saw in this place, they have not abated. So we have to be firm, resolute and unyielding in our defense of the right to vote and to have that vote counted,” Biden said from the US Capitol, where a mob of Trump's supporters attempted to overturn the 2020 election results.

“So now let's step up, write the next chapter in American history, where January 6th marks not the end of democracy but the beginning of a renaissance of liberty and fair play,” Biden said.

In remarks delivered before Biden spoke, vice-president Kamala Harris also cast a spotlight on Trump supporters' efforts to subvert democracy, calling on Congress to pass voting rights legislation and on Americans to participate.

“We cannot let our future be decided by those bent on silencing our voices, overturning our votes and peddling lies and misinformation by some radical faction that may be newly resurgent but whose roots run old,” Harris said.

“The fragility of democracy is this: that if we are not vigilant, if we do not defend it, democracy simply will not stand; it will falter and fail.”

Biden and Harris plan to travel to Georgia on Tuesday to deliver remarks about voting rights.

Democrats say federal election reform is necessary to counter a wave of voting restrictions adopted last year by Republican-led states. The laws were inspired by Trump's false claims of widespread fraud in the 2020 election, which he lost to Biden by a substantial margin.

Americans vote in lower numbers than in many other developed nations, historical data shows, with eligible turnout during presidential elections hovering near 60%  for much of the past century. Numbers spiked in the 2020 election to nearly 67%.

Democrats hope that greater voter turnout will favour them, especially as demographic shifts shrink the white majority in the country of roughly 330 million people.

Democrats' efforts to pass voting rights legislation in Congress appeared in jeopardy this week, as centrist Democratic Senator Joe Manchin said he had little interest in a strategy that would allow the party to bypass Republican opposition.

Biden and his advisers had shied away from talking directly about Trump during the Democrat's first year in office, but Thursday marked a turnaround. Biden attacked the “defeated” former president's “bruised ego” and his followers' refusal to accept reality.

“You can’t love your country only when you win. You can't obey the law only when it's convenient. You can't be patriotic when you embrace and enable lies,” he said.

“Those who stormed this Capitol and those who instigated and incited and those who called on them to do so held a dagger at the throat of America — at American democracy.

“Now it’s up to all of us — to “We the People” — to stand for the rule of law, to preserve the flame of democracy, to keep the promise of America alive.”