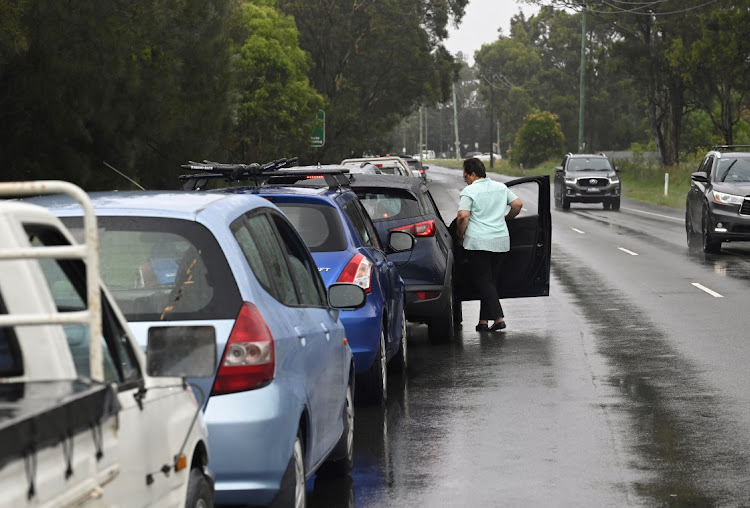 A woman in line at a coronavirus (Covid-19) testing centre steps out of her vehicle to look at the queue of traffic blocking a Western Sydney highway in Sydney, Australia, January 5, 2021.
Image: REUTERS/Jaimi Joy

Many Australians, already unhappy about long queues at public testing centres and a shortage of at-home tests, were further incensed when news broke that tennis world number one Novak Djokovic had been given a medical exemption to enter the country.

Prime Minister Scott Morrison, under pressure at the start of an election year, has sought to reassure voters that his centre-right Liberal-National Party coalition has the situation under control, while keeping tight control on the purse strings.

“There are no silver bullets here,” Morrison told reporters ahead of a meeting of national cabinet, the group of federal and state and territory leaders tasked with handling the pandemic.

“You've just got to work the problem, work it together and push through.”

Officials reported a record 64,774 new cases, the majority in New South Wales and Victoria, the country's most populous states. That easily exceeded the previous day's national tally of around 47,800.

Total infections have surged more than 50 times from around 1,200 since late November, when the first Omicron case was detected in the country.

People admitted to hospitals in NSW and Victoria rose 10% over the previous day, and authorities warned those numbers would rise further over the next several weeks.

“We have got some challenging weeks ahead of us,” NSW Deputy Health Secretary Susan Pearce told reporters.

The rapid surge in cases in recent weeks has led to long lines at publicly-funded PCR testing centres. That prompted authorities to ask people to only seek PCR tests if symptomatic, which in turn led to a shortage of rapid antigen tests, which can be used at home but must be purchased privately.

Morrison, who must call a federal election before May, has ruled out subsidising the majority of the at-home testing kits, citing a heightened role for “personal responsibility”.

Authorities also fielded sharp criticism about the decision to grant Djokovic, who has declined to reveal his vaccination status but has previously stated his objection to mandatory vaccines, a medical exemption to play in the Australian Open tennis Grand Slam tournament.

The decision prompted an outcry on social media and criticism from other sports people, medical professionals and lawmakers.

Former Australian Rules player Kevin Bartlett tweeted that Australians “have been taken for fools,” while another former player Corey McKernan tweeted: “People with loved ones who are dying/some needing urgent treatment cannot get into their own states. You tell people they can't go to Coles or a cafe without being vaxxed but if you're world number one you get a pass?”

Many Australians, and particularly those in Melbourne which hosts the year's first tennis major later this month, have been subjected to a series of lengthy lockdowns over the past two years.

Federal and state government heavily pushed the importance of vaccinations. As a result, 90% of people over 16 have been double dosed and a booster programme is rolling out.

“It sends an appalling message to millions seeking to reduce #Covid19Aus risk to themselves & others. #Vaccination shows respect, Novak,” tweeted Stephen Parnis, a former vice-president of the Australian Medical Association.

Tennis Australia and the Victorian state government said Djokovic did not receive any special treatment in a blind review process that involved a panel of health experts.

When asked his opinion, Morrison said the decision was the remit of the Victorian government.

Australia has recorded more than 612,000 cases and 2,290 deaths since the coronavirus pandemic began, with more than half of those infections reported over the past two weeks.