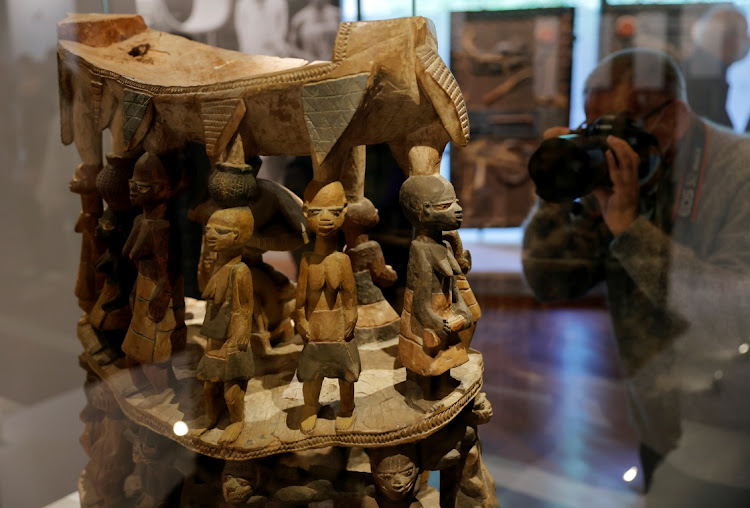 A Royal seat, Benin, Cana (18th-19th century) is displayed during the exhibition "Restitution of 26 works from the royal treasury in Abomey" at the Quai Branly museum before a ceremony to mark the return of 26 artworks of the Kingdom of Dahomey to Benin, in Paris.
Image: PASCAL ROSSIGNOL/ File photo

Benin's President Patrice Talon signed an agreement on Tuesday to take back from France 26 artworks seized from the former French colony in the 19th century, and said he hoped it would pave the way for more cultural treasures to be handed back.

The 26 artworks were taken in 1892 from Benin's Palaces of Abomey — today a UNESCO World Heritage site — and have been on display in a museum in Paris, alongside thousands of other artefacts taken from Africa during colonial rule.

They will now be handed back, but they are only some of the 5,000 works whose return Benin is seeking.

“You'll agree with me that the restitution of 26 artworks we are celebrating today is only a step in the ambitious process of equity and of restitution of ... heritage extorted from the territory of the Benin kingdom by France,” Talon said, speaking to French President Emmanuel Macron after a signing ceremony at the Elysee Palace.

The handover marks a milestone in the years-long fight by African countries to recover works taken by Western explorers and colonisers, at a time when numerous European institutions are grappling with the cultural legacies of colonialism.

The process of handing back the artworks that France had taken from the Palaces of Abomey was first promised by Macron in 2017.