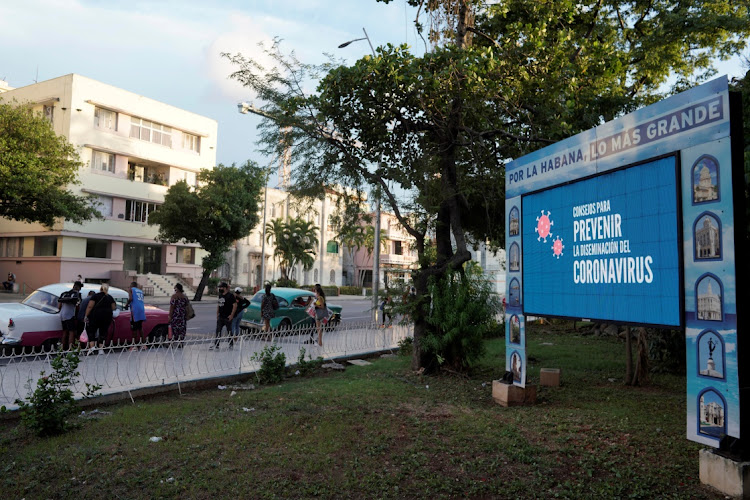 A screen displays a message about Covid-19, in Havana, Cuba, on August 9 2021.
Image: REUTERS/Alexandre Meneghini

Cuba’s public health minister said on Sunday efforts were under way to restart the country’s main oxygen factory which had broken down even as the death toll from Covid-19 on Saturday reached 98, equal to the pandemic record.

Daily cases are averaging between 8,000 and 9,000 and fatalities at nearly 1% of cases, low by international standards but high for Cuba which last year had a death rate of 0.67%.

The health crisis, on top of an economic one that saw the economy fall 10.9% last year, and an additional 2% through June compared with the same period last year, has resulted in a scarcity of consumer goods and frayed nerves in the Communist-run country. Last month tens of thousands took to the streets in protest, the most serious unrest since the early days of the 1959 Revolution.

Residents and some medical staff have taken to social media complaining of treatment in a land that prides itself for the quality of its free health system.

The country of 11.2-million residents has fully vaccinated three-million with home-grown vaccines, with another two-million expected to get a final shot before September.

Last week, official comments seemingly blaming health workers for collapsing health services provoked an unusual push back on social media with doctors blaming the government for a lack of supplies and poor management.

Portal took pains on Sunday to praise “the work of our health professionals on the front lines” while admitting there were shortages of some medicines used to treat Covid patients, 80% of which are produced locally.

Cuba’s health minister said a high-level commission was doing everything possible to make up for the oxygen shortage without indicating when the main plant would come back online.