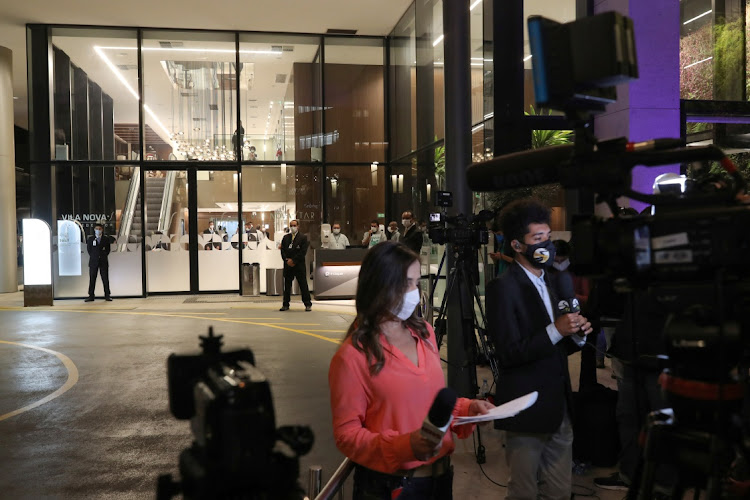 Brazilian President Jair Bolsonaro was transferred to a Sao Paulo hospital on Wednesday to undergo tests for an obstructed intestine, with the president's office saying he could receive emergency surgery in his latest health complication from a 2018 stabbing.

The Vila Nova Star hospital in Sao Paulo, where Bolsonaro, 66, was transferred, said late on Wednesday that the president would remain hospitalised “initially under conservative management.”

His son Flavio, speaking to radio station Jovem Pan, said Bolsonaro had earlier in the day been moved to an intensive care unit in Brasilia and intubated.

“He ended up being intubated to keep him from breathing in liquid coming from his stomach,” Flavio Bolsonaro said in the interview.

The news of Bolsonaro's hospitalisation comes as the far-right leader is sinking in opinion polls due to his handling of the world's second-deadliest coronavirus pandemic and a simmering corruption scandal over his government's purchase of vaccines.

It also caps days of questions over his health due to a chronic case of hiccups, a stubborn cough following a 2020 Covid-19 infection, and a series of surgeries after the campaign-trail stabbing shortly before his 2018 election victory.

Shortly after news of his transfer to Sao Paulo, Bolsonaro posted on his Facebook page a photo of himself smiling with his eyes closed and lying in a hospital bed covered in sensors and cables.

What appears to be a priest, with a golden crucifix, stood by his side, placing his hand on the president's shoulder.

“I thank everyone for their support and prayers,” Bolsonaro said in the post.

Bolsonaro went to the military hospital in Brasilia early on Wednesday, with his office initially saying it was to undergo tests for chronic hiccups.

But later, the president's office said Antônio Luiz Macedo, the surgeon who operated on Bolsonaro in 2018, had decided the president should go to Sao Paulo for additional tests to investigate an obstructed intestine, and possible emergency surgery.

Fábio Faria, Brazil's communications minister, told a news conference that Bolsonaro had been sedated in the morning and would likely travel to the same hospital where he had previously been operated on by Macedo.

He arrived at the Vila Nova Star hospital in Sao Paulo in the evening, television images showed.

Faria added that the president's schedule would be cleared for 48 hours.

Bolsonaro's son Flavio, in a separate interview with CNN Brasil, said that a procedure to remove liquid from his father's stomach had been performed as a precaution.

He added that if his father needed surgery, he had been assured it would not be a serious operation.

Bolsonaro nearly died after the stabbing in 2018, resulting in multiple follow-up surgeries.

Recently, Bolsonaro had appeared unwell. In a national address on social media last Thursday, he struggled to express himself at one point, and said he had been suffering from hiccups for a week.