US to probe Louisville, Kentucky, police after Breonna Taylor death 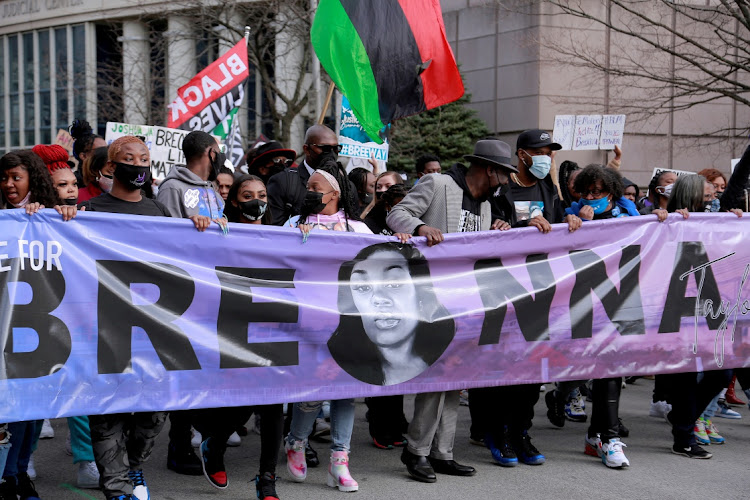 People attend a rally to mark one year since police officers shot and killed Breonna Taylor when they entered her home, in Louisville, Kentucky, US on March 13 2021.
Image: REUTERS/Amira Karaoud/File Photo

Attorney-general Merrick Garland said the probe, which will focus on the police department and the Louisville-Jefferson County government, will evaluate whether the police routinely use unreasonable force, including on protesters, as well as if they routinely conduct unconstitutional searches.

The move came five days after the department began a similar review of the Minneapolis Police Department after its former officer, Derek Chauvin, was found guilty of murdering George Floyd, a Black man, last year.

The inquiries mark a sharp shift in the department's focus under Democratic President Joe Biden, who has made racial justice a priority and plans to discuss police reform in his first speech to Congress on Wednesday.

Garland said the investigation would also look at whether Louisville police regularly engage in racially discriminatory practices or deny access to public services for people with disabilities.

“Those investigations and recommendations and actions that ensue do not only protect individuals' civil rights; they also assist police departments in developing measures to increase transparency and accountability,” Garland said.

He credited the Louisville police department with having taken some measures to improve since Taylor's death, including reaching a settlement with her family.

“We've been building momentum for this type of audit for months,” he told a news conference.

“What I will be pushing for is more resources, more training. ... More tools other than lethal force,” she said.

Shields was appointed to the post earlier this year after stepping down as Atlanta police chief last June after the fatal police shooting of an African-American man, Rayshard Brooks, which was caught on video and set off days of protests.

Also weighing in was Republican Senate Minority Leader Mitch McConnell of Kentucky, who told reporters on Monday that “there have been significant challenges there in my hometown since the Breonna Taylor incident. And it's not certainly not inappropriate for the Justice Department to take a look at it”.

The civil probes into policing practices in Minneapolis and Louisville are separate from the department's criminal civil rights investigations into the killings of Floyd and Taylor.

A federal “pattern or practice” investigation typically involves two parts — one that looks at possible violations of civil rights and another that looks at whether those violations are linked to a police department's operations, policies or training of its officers.

If the department finds evidence of misconduct, it will issue a public report with those findings and negotiate remedies. Should the city and the Justice Department disagree on how to cure the violations, the department could file a lawsuit and get a court order, Garland said.

The deaths of Floyd and Taylor helped spark nationwide protests against racism and police brutality.

Only one of three officers involved in the Taylor shooting faced charges.

But officials at the FBI and the Louisville US Attorney's Office have been investigating other officers involved, a law enforcement official told Reuters.

Garland rescinded that policy this month, saying the department would be returning to its traditional practices of investigating state and local police departments and allowing unit heads to approve most settlements and consent decrees.