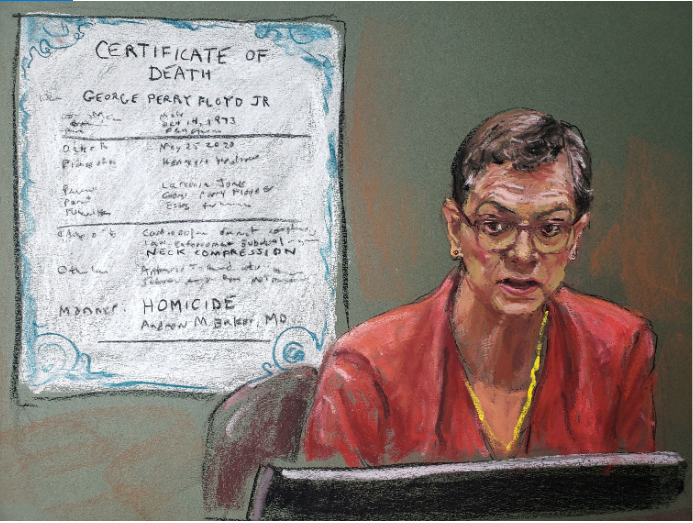 Forensic pathologist Dr Lindsey Thomas testifies on the tenth day of the trial of former Minneapolis police officer Derek Chauvin for second-degree murder, third-degree murder and second-degree manslaughter in the death of George Floyd in Minneapolis, Minnesota, US on April 9, 2021 in this courtroom sketch.
Image: REUTERS/Jane Rosenberg

A forensic pathologist testified on Friday that the sheer volume of videos of George Floyd's arrest helped confirm the finding that oxygen deprivation caused his death, not an opioid overdose, as argued by lawyers for the former Minneapolis officer on trial for his murder.

Dr. Lindsey Thomas said she agreed with the findings of the Hennepin County medical examiner who ruled Floyd's death was a homicide caused by the way Derek Chauvin and other officers pinned him to the ground on May 25, 2020.

"There's never been case I was involved in that had videos over such a long time frame and from so many different perspectives," she told the jury, saying the videos made it clear physical signs associated with opioid overdose were not seen in Floyd's death.

Dr. Andrew Baker, the medical examiner, is due to testify later on Friday.

Chauvin, who is white, was recorded in multiple videos kneeling for more than nine minutes on the neck of Floyd as the 46-year-old Black man, in handcuffs, begged for his life in a fading voice. The arrest sparked global protests against police brutality.

Below are some important moments from the tenth day of witness testimony:

Dr. Thomas was an assistant medical examiner in the Hennepin County medical examiner's office until she went into "semi-retirement" in 2017. She told the jury she had performed over 5,000 autopsies over her career.

While physically examining a body can be helpful in determining a cause of death, she explained to the jury that other records and inquiries could sometimes be even more illuminating.

"What was unique in this case was the volume of materials I had to review," she told the jury, referring to videos recorded on bystanders' cellphones and police body-worn cameras. "I never had a case like this that had such thorough documentation of the terminal events."

She said the videos made clear that Floyd died because his body was deprived of oxygen by the way Chauvin, 45, and other officers pinned him to the ground as they arrested him on suspicion of passing a counterfeit $20 bill to buy cigarettes.

Thomas was the fourth medical expert called by the Minnesota attorney general's office as prosecutors seek to dismantle Chauvin's central defense, that the fentanyl found in Floyd's blood at death killed him.

"There was nothing sudden about his death," Thomas told the jury, challenging a defense argument that Floyd's underlying health problems may have led to a heart attack. "Likewise, it was not the type of death that has been reported in fentanyl overdose, for example, where someone becomes very sleepy and then just sort of gradually, calmly, peacefully stops breathing."

Jurors were handed envelopes containing photographs of Floyd's corpse, and Thomas drew their attention to abrasions on the left side of Floyd's face and his shoulder.

The wounds were "consistent with what it looks like on the video, that he's struggling to push himself into a position where he can breathe," she said.