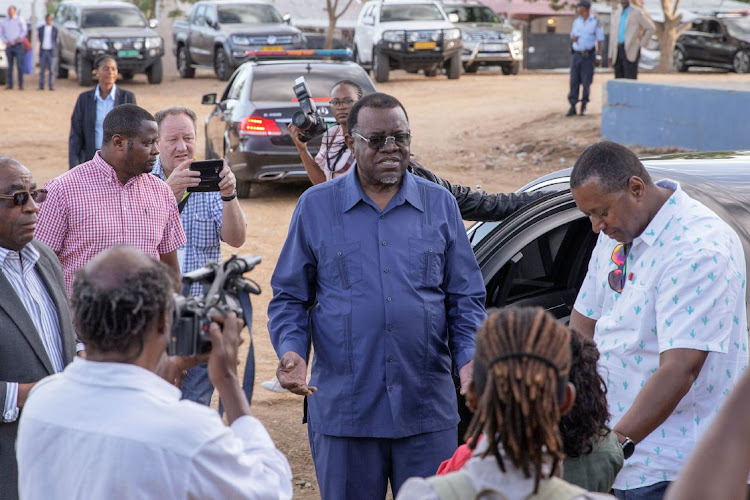 Namibia’s incumbent President Hage Geingob has won the 2019 presidential election with 56.3% of the vote, the Electoral Commission of Namibia (ECN) said on Saturday, surviving the country’s biggest corruption scandal, an economic recession, and a fractured ruling party.

Geingob, Namibia’s third leader since the sparsely populated and mostly arid country freed itself from apartheid SA in 1990, was seeking a second and final term in the November 27 election.

First elected in 2014 with 87% of the vote, Geingob garnered 56.3% and avoided a potential rerun against a member of his own party, Panduleni Itula, who was running as an independent.

Itula, a dentist-turned-politician, trailed with 29.4% of the vote, and the leader of the official opposition party, McHenry Venaani, was in third position with 5.3%.

“I am just a proud Namibian that we could have free and fair elections, no fighting, no attacking each other, free movement was allowed,” Geingob told cheering crowds.

In the legislative vote to choose 96 MPs, the ruling party lost its two-thirds majority after Swapo secured 63 seats, down from 77 seats, while the official opposition party, Venaani’s Popular Democratic Movement (PDM) party, will hold 16 seats, improving from its 2014 total of five in the legislative chamber.

Opposition leader Venaani said they were considering approaching the courts over “anomalies and irregularities” during the election.

The ECN had previously said the vote-tallying would take 48 hours, but it announced the winner after 72 hours, raising concerns over the potential for vote-rigging.

A sputtering economy, one of Namibia’s worst droughts and the biggest corruption scandal in its history have weighed on support for Geingob.

The economy has been stuck in a recession for nearly three years, hurt by a drought that ravaged agricultural export crops, as well as by unprofitably low prices for Namibia’s main hard commodities, uranium and diamonds.

A scandal in which two ministers were alleged to have conspired to dole out fishing licences to Iceland’s biggest fishing firm, Samherji, in return for kickbacks, also has taken the shine off the ruling party. — Reuters