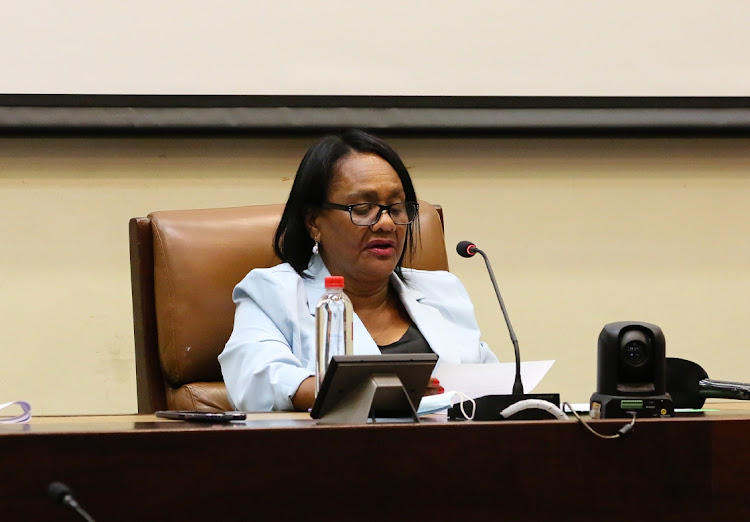 PRESSURE ON: Bay mayor Eugene Johnson has been criticised by the UDM
Image: WERNER HILLS

The UDM has called on Nelson Mandela Bay mayor Eugene Johnson to drop her recommendation to the council that acting city manager Noxolo Nqwazi be cleared of wrongdoing in a toilet tender row.

The UDM has also called for more details to be provided to the council on how SK Business Consultants was hired to act as a middleman between the municipality and SMMEs before the outcome of a forensic firm probe into the appointment.

This emerged in a letter sent by UDM regional co-ordinator Siyabonga Nguqu to Johnson on January 15.

This is not the first time the UDM has rocked the boat as cracks in the coalition running the metro continue to appear.

The UDM has threatened to boycott coalition meetings and abstain from voting in council if specific demands are not met.

The party claimed the allocation of political deployments among the coalition members was unfair and also questioned Nqwazi’s appointment as acting city manager.

Johnson recommended during a council meeting earlier in January that Nqwazi be cleared after she signed off on the appointment of a Free State company hired to install toilets at the height of the Covid-19 pandemic.

The recommendation was contained in a confidential report written by the mayor that was discussed in council behind closed doors.

HT Pelatona Projects was awarded the R24m contract by the municipality on April 28 2020 through a deviation, using the three-quote system.

The Special Investigating Unit (SIU) halted all payments from the municipality to the company a few months later.

The item was debated at the January council meeting but later deferred.

Nqwazi has denied any wrongdoing.

At the same meeting, it was decided that a forensic firm would be asked to probe how SK Business Consultants was hired

It was also agreed that the municipality’s disciplinary board would look into the matter.

However, Nguqu said the decision was premature and that the council had been misled.

In the letter, he said any appointment of a firm to carry out a forensic investigation would be “erroneous” and not in line with legislation.

He said the contract should first be investigated by the city’s internal audit division and then presented to the council for a decision.

Moximark, which trades as SKB Business Consultants, signed three service level agreements (SLAs) to act as a middleman between the municipality and SMMEs.

The SLA was flagged as irregular after it emerged that SKB failed to meet the minimum requirements when it submitted its tender.

In her report, Johnson moved to get her recommendations adopted by citing a legal opinion by advocate Shaheed Patel who said an R11.38m invoice from the company was enough to have the contract probed.

However, Nguqu said that Johnson had failed to include Patel’s legal opinion.

He said the party had since obtained the opinion and that Patel had disclosed he had been unable to gather all the facts on the contracts.

“I have not been favoured with copies of the relevant tender documentation, nor the [joint venture’s] tender submission, nor the [bid evaluation committee] minutes,” Nguqu quoted Patel as saying in his legal opinion.

“It is on the basis of this that the UDM believes that the legal opinion dated November 9 is misleading and should be disregarded because on what basis will the author of such legal opinion continue to express a legal opinion in the absence of such critical information” Nguqu said.

The UDM  also said the recommendations gave rise to a conflict because Nqwazi was involved in both contracts and would have to ensure the council resolutions were carried out.

Nguqu said the council had no right to set aside a draft report that implicated Nqwazi.

“It is not dependent on you to make a determination as to whether the SIU is wrong or right but on the process clearly outlined in both [the acts]," he said.

He said Johnson misled the council when she made her recommendations based on a draft report  when the completed SIU  report was available to her.

However, Johnson’s spokesperson, Tango Lamani, denied the existence of a final SIU report, saying the municipality had received only two different drafts.

“The municipality refutes this unfounded allegation that it has received a final SIU report in this regard.

“We have been transparent to the public by tabling the draft SIU report to the council.

“When we do receive the final SIU report, we will not hesitate to present it to the appropriate municipality channels,” he said.