'The first head to roll must be De Lille’s': MPs demand accountability for fire in parliament 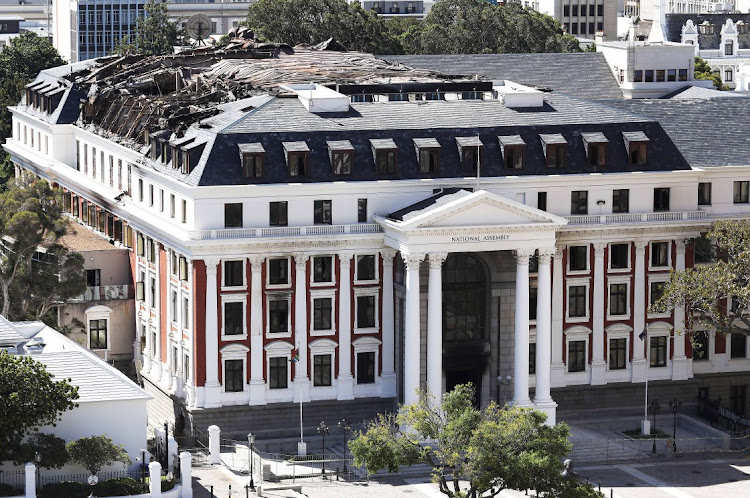 Seething MPs on Friday called for an independent forensic investigation to determine the cause of the fire that gutted the National Assembly buildings on January 2.

They also want those responsible to be held accountable for the destruction of a national key point.

“The minister sat there with her arms folded for a year asking for the report but said heads will roll. The first head that must roll must be yours,” said DA MP Madeleine Hicklin.

Hicklin was among MPs in a joint standing committee meeting on financial management of parliament which received a briefing from the department of public works and infrastructure on progress made in the investigation into the cause of the fire.

When MPs from both houses met on Thursday, house of committee chairperson Cedric Frolick said it was difficult to know the extent of the destruction at this stage as the building had been declared unsafe by public works engineers.

TimesLIVE reported on Friday that at least 15 months before the devastating blaze which started on January 2, parliament's buildings were not compliant with fire regulations and the ventilation system design and fire protection in the parliamentary precinct needed to be reviewed by a fire consultant.

These were some of the findings of an independent review of parliament prestige construction projects by external auditing company BDO.

Details and findings of the 194-page report were made public on Friday morning before the meeting began.

Briefing MPs on the report, department of public works acting DG Imtiaz Fazel said the report made 30 findings in the areas of construction, financial and contract management, among others.

“You commissioned this investigation in August 2020 and BDO was appointed. The draft report was submitted in October 2020 and the final report was handed over in November 2020.

“You claim that you didn’t know this until September 17 2021. You are the policy leader in the department, how can you commission an investigation in August of 2020 and not receive a report until September 2021 and not question where this report was?

De Lille seriously placed lives at risk. If you read the report and the findings, it is very clear that had anybody been on the premises at the time, it would have been horrific.

“BDO says they gave this report to the department in October 2020 and you give out a statement in September 2021 saying heads will roll because this report was not handed to you. Well, heads have not rolled, have they? Neither your head, nor the head that they gave the report to.

“How can we take you seriously [when you say] that you are going to implement the changes that this report mandates you to take seriously? Because we have just had this massive fire that has absolutely ruined the greatest building in this country.”

“I am not going to accept that we are just going to wait for a police report that will come out in a year or 18 months’ time. We as parliament need to exercise our oversight now and I support the view that the SAPS need to account as well,” said Swart.

Adding his voice, the NFP’s Ahmed Munzoor Shaik Emam said by not acting on the BDO report, “De Lille seriously placed lives at risk. If you read the report and the findings, it is very clear that had anybody been on the premises at the time, it would have been horrific.”

Earlier, presenting parliament’s internal audit report, acting secretary to parliament Baby Tyawa told MPs about the role of the police and parliament's protection services on the night of the incident.

“In 2020 March, we changed our working schedule. Our parliament protection service stopped working on the weekends and on public holidays and the work of securing the precinct was given to SAPS, as indeed this is a national key point,” Tyawa said

“We did not have our officials on the night that the fire happened. Their schedule was to start on January 3 because January 2 was a Sunday. However, there is always a standby team, [so] where members need to access their offices, colleagues are called in.”

On the role of the police, Tyawa said: “They are charged to control the access into the perimeter, patrolling and monitoring the cameras that are around the whole of parliament.”

Deputy minister of public works and infrastructure Noxolo Kiviet said the insurance of the building was a legal matter.

“As we engage in that discussion, let us not make it as if there has been wrongdoing on the part of the department of public works. Let’s stop making as if we carry that burden as a department. It is the burden of all of us because it is a law,” she said.

Kiviet welcomed the call for the establishment of a forensic investigation.

Fazel added that the department had engaged with the Hawks and had provided information to assist with the investigation.

“We received a request that we should not disclose any information about the site and the damage, given that it is a crime scene. We are co-operating with the investigation by the Hawks,” he said.