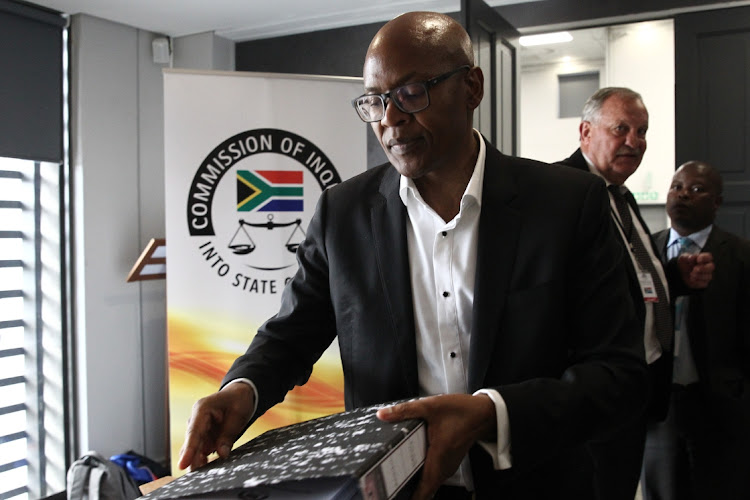 Mzwanele Manyi at the state capture inquiry. According to the Zondo report, the now-defunct Gupta-owned The New Age newspaper received more than R32m from the GCIS. File photo.
Image: Thapelo Morebudi

Former Government Communication and Information System (GCIS) CEO Mzwanele Manyi has defended dishing out millions of rand worth of advertising to the Gupta-owned The New Age (TNA) newspaper.

Manyi says the decision to “support” community and small media, and new initiatives like TNA, was a government policy to promote media diversity.

He made the remarks in a detailed statement responding to the first part of the state capture report handed last week to President Cyril Ramaphosa. Part of the more than 870-page report found Manyi to be an “enabler” of state capture during his time as GCIS boss.

“It is unfortunate though that the report didn’t point out specific wrongdoing in what it termed enablement,” he added.

According to the report, the now-defunct Gupta-owned newspaper received more than R32m in advertising spend and sponsorships from the GCIS:

Manyi said there was nothing untoward about this.

“All the media procurement by GCIS for client departments was conducted within available prescripts. None of the media spend was declared irregular,” he said.

“It must be recorded that at the time there was no government policy to compel government departments to use either Telmar or the private sector Audit Bureau of Circulation (ABC) as a requirement to place advertising spend.

“Instead, in pursuit of supporting and promoting media diversity and media freedom for all, the Media Development and Diversity Agency (MDDA) Act provided support to community and small commercial media. It also ensured the creation of an enabling environment for plurality of voices.”

“Therefore, support for community and small media, new initiatives like TNA was not intended to enable state capture, as opined by the report, but to promote media diversity.

“It is unfortunate that in implementing government policy, GCIS is now branded an enabler of state capture. If perhaps in the various departments there was undue pressure to spend with TNA, it is unfair and wrong to attribute that pressure to GCIS.”

The inquiry report found the circumstances in which Manyi was transferred to the GCIS from the department of employment & labour, where he was director-general, to be dubious and came after the then GCIS CEO Themba Maseko rejected an instruction by Zuma to “assist” the Guptas.

The commission said, based on its findings, the enablement of state capture would not have happened under Maseko.

The report holds a misguided and factually incorrect view that GCIS under Maseko would have resisted what the report referred to as the Guptas’ incessant pressure on the government departments to divert their media spend to their businesses.

“It is not clear how the report came to such a spurious conclusion because GCIS was not 'Big Brother' to any department,” said Manyi.

Despite criticising the report, Manyi said he welcomed the commission's decision not to make recommendations against him.

“I welcome that the state capture report has no recommendations directed against my name, which is a further confirmation that indeed the absence of my name even in the original state of capture report by advocate Madonsela was not an accident,” he said.

Ramaphosa has received part 1 of the report, which focused on SAA and related companies, as well as the The New Age newspaper, the SA Revenue Service and public procurement.

Several high-profile politicians, businesspeople and individuals are implicated in alleged corruption and looting of taxpayers’ money.

The commission, chaired by acting chief justice Raymond Zondo, is expected to hand over the remaining two batches of the report in due course.