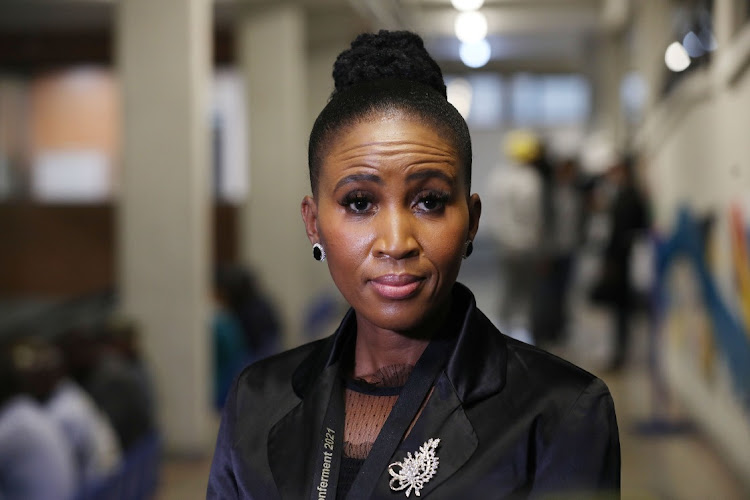 Phalatse came under fire in 2018 while serving as MMC for health after saying the city was “a friend of Israel”. She was later suspended and made an about-turn as a result of the backlash.

On Thursday her acceptance speech at the council chambers was disrupted as soon as she took to the podium. ANC councillors, who took up the opposition benches after a poor showing in the November 1 local government election, demanded that she withdraw the comments.

They held up placards saying, “Away with a mayor pro-apartheid” and chanted “Free Palestine”.

Most of the ANC councillors were wearing Palestinian keffiyehs around their necks.

Phalatse did not give in to their demands.

It was only after the intervention of council speaker Vasco da Gama that the chaos stopped — and after he threatened to kick councillors out of the meeting.

In her speech, Phalatse vowed to work with all the elected parties in Johannesburg, which was one of the country's 61 hung municipalities after the DA failed to win an outright majority.

Phalatse became the first black female mayor through the support of the EFF and ActionSA, among other parties who voted against the ANC's candidate.

“We find ourselves at a crossroads today. We face an important choice: we can either let Johannesburg struggle along an increasingly unlikely pathway or we can decide to unite in our efforts to improve the lives of all the residents,” she said.

“As the incoming executive mayor, I wish to ensure that we govern inclusively in a manner that bridges and connects, rather than divides.”

Citizens have a right to know where or how their money is spent, how government tenders are awarded and what steps government is taking to reduce corruption and waste.

Other opposition parties, alongside the DA, had agreed on several points which Phalatse said were non-negotiable. These included fairness to all, customer focus and flexibility, transparency and accountability in governance.

“We must ensure great accountability and ensure that spending reflects the real needs of our citizens,” said Phalatse.

It was important to rebuild the public’s trust in the city, she said, and this would be achieved by the delivery of quality services to all residents, prioritising safety, and getting the city to be pro-business and to create jobs.

Most parties rallied behind Phalatse, urging her to use her platform to support the voiceless and attend to the city's billing crisis.

The ANC’s mayoral candidate, Mpho Moerane, was critical of her speech. He expressed concern at Phalatse’s Israel comments and promised to hold her to account from the opposition benches.

“You have been saying that you are committed to an inclusive government — the next couple of months offer you an opportunity to walk the talk in this regard,” he said.

Moerane added that the ANC remained the majority party in the city and would fight tooth-and-nail to ensure that interests of its constituency were catered for.