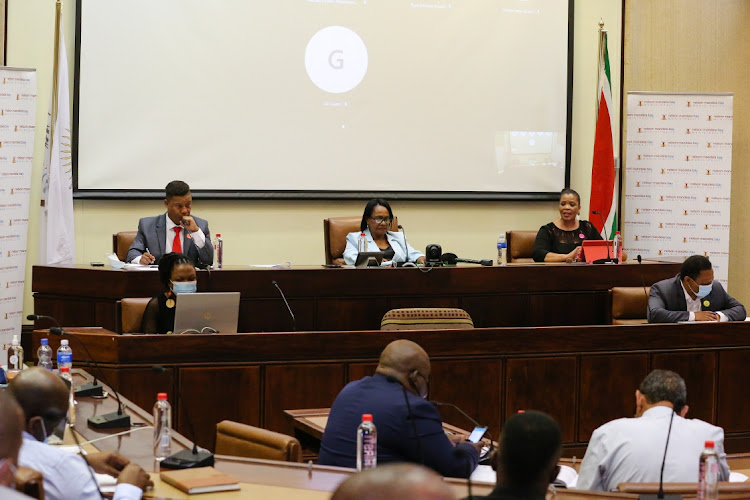 These are several of the targets Nelson Mandela Bay’s newly elected mayor Eugene Johnson hopes to achieve in her first 100 days in office.

Johnson addressed the media on Tuesday where she outlined several plans for the municipality’s various departments.

These plans, she said, were aimed at better service delivery and to advance pro-poor policies.

The city is faced with severe challenges ranging from drought to constant power outages, vandalism and a poor service delivery track record.

Johnson, however, believes her minority government is capable of delivering services to the people.

She said the city was under tremendous strain with the drought but water augmentation projects would be intensified by infrastructure and engineering political head Stag Mitchell.

“We’ve met with the department of water and  sanitation and they are committed to lending support to us to avoid reaching day zero.

“One of the major projects instituted to increase the city’s potable water is to channel water from the Orange River via Nooitgedacht,” she said.

The last deadline for completion of Nooitgedacht’s phase three was by the end of September 2021.

The project has been stalled for several months in 2021 due to payment disputes.

“We know their desire to fill up their swimming pools during this festive season [but] we are saying to the residents to refrain from that.

“We have water restrictions to make sure water consumption is managed,” she said.

She said Mitchell and his executive director, Joseph Tsatsire, were committed to raising drought awareness.

Tsatsire, however, has already asked to return to his old post as municipal water distribution director.

She said leaks would be fixed within seven to 14 days of being reported, while the turnaround time was 48 hours before the municipal polls.

Mitchell said there were 4,000 water leaks across the Bay, with about 100 complaints reported every day.

“Water leaks are a moving target in the city,” he said.

“We have 38 plumbing teams but the organogram of the municipality has space for 51 plumbers.

“We have to fill the critical vacancies to fight the leaks.”

Johnson said talks would start with sporting fraternities to close facilities with high water usage along with interactions with the tourism industry.

“They have assured me that the metro police will not be lenient with anyone found to waste water, from car washes to swimming pool owners, businesses or residents,” she said.

“We all have a responsibility to conserve this valuable resource.”

Johnson touched on vandalism and said it would be tackled head-on through innovative ideas.

“We will enhance the policing of assets with technological solutions, an efficient operational plan must be put in place to accompany the installation of CCTV cameras and alarm systems,” she said.

Troon said vandalism amounted to R700m worth of damages.

“That alone shows there was no MMC before me.

“It cannot be that we want to protect some of our buildings with alarms that are supposed to cost R1,000 but now cost R7,500.

“It will never happen. These properties will be secured through correct and legal tenders.”

“We have bought CCTV cameras to see directly who the perpetrators are, and joined hands with the Nelson Mandela Bay Business Chamber and safety and security department to go to the areas,” he said.

Johnson also indicated that the municipality was capable of assisting more residents in need of free basic services.

She said the  assistance to  the poor programme (ATTP) must be rolled out to more deserving households.

“We cannot allow our residents to be crippled by economic hardship while we have a mandate and programmes to assist them,” she said.

Johnson said an item would be tabled at the next council meeting as part of the municipality’s debt relief policy to consider a one-off amnesty for defaulting households.

“Late payments of invoices [to businesses] must become a thing of the past as we cannot be contributors to the financial difficulty of local businesses.

“The National Treasury guideline of payment within 30 days after receipt of invoices must be met as a matter of course.

“We are still feeling the pinch of the R120m grant funding that we lost during the previous administration.”

The new coalition will have to deal with a R120m financial hole after a rollover application for two grants was rejected by the National Treasury.

The money will be recouped through December’s equitable share tranche, placing a huge burden on the municipality’s budget.

The tranche reduction will have a drastic effect on the city’s assistance to the poor and expanded public works programme.

The  ATTP programme is funded by the equitable share grant, which subsidises water, sanitation, refuse services, electricity and property rates for the city’s most indigent residents.

“Engagements with the National Treasury must be initiated to see if those funds can still be accessed.”

She said the R350 reconnection fee for poor households should be revisited.

“I will be leaning heavily on Jack to ensure that local economic development is prioritised to turn the fortunes of local businesses around and to unblock bottlenecks hampering investments in the local economy.”

She said there were plans to create 900 job opportunities for young people as water ambassadors, tourism ambassadors and caregivers for the elderly which formed part of the Presidential Stimulus Programme.