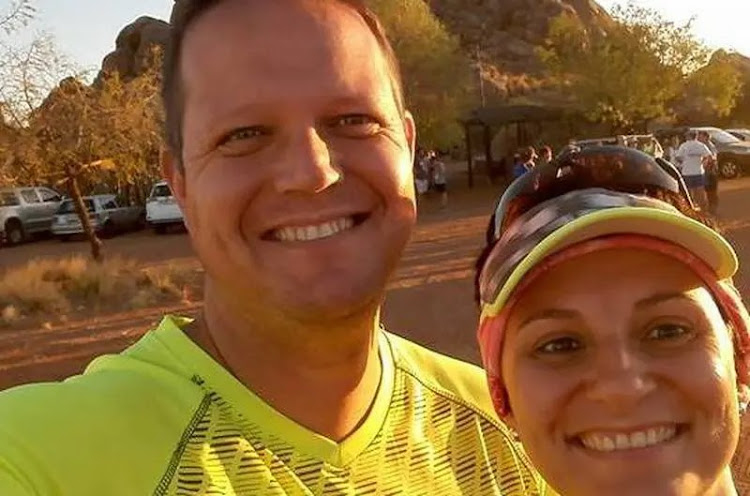 Werner de Jager with his wife Liezel, who he found stangled outside their south Durban home two weeks ago.
Image: via Facebook

Police are searching for the husband of murdered Amanzimtoti minister Liezel de Jager, who has been reported missing by his father-in-law.

The NG Kerk Suidkus minister’s lifeless body was discovered by her husband Werner in the yard of their Athlone Park home two weeks ago.

She was found with strangulation marks on her neck and none of her possessions had been taken. She had returned home from a jog.

It is understood that Werner was last seen by his father-in-law on Saturday morning.

The couple’s two daughters are being cared for by their maternal grandparents.

Police spokesperson Col Thembeka Mbele told TimesLIVE on Wednesday that police are still looking for him.

“The murder case is still under investigation. We will issue a statement as soon as there is a breakthrough,” she said.

Moving tributes were made to the 38-year-old mother of two at her memorial service last Tuesday.

Her emotional brother Herman Coetzee read out touching messages from her parents, husband and children.

He described her as a daughter and sister “through thick and thin”.

Her parents described her as their “sunshine child”.

In his brief message, Werner said he wished he had written her more notes and poems.

“You know me and our girls love you dearly. You have left a void in our lives. We will miss you forever. Rest in God’s arms, my love.

“Know everybody misses you and will for years,” he said.

De Jager’s colleague and friend Marius Schoombie told mourners there “are few answers and many questions”.

“Our hearts are broken. One day we will know what happened ...”