Jacob Zuma to be 'welcomed' home with prayer event in Durban 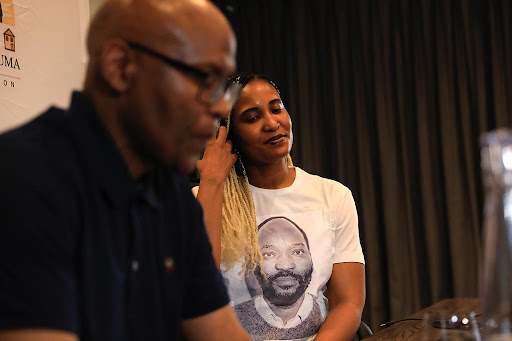 Mzwanele Manyi and Duduzile Zuma were among guests at the announcement on Friday of a "welcome" event for former president Jacob Zuma at a briefing in Johannesburg.
Image: Alon Skuy

Former President Jacob Zuma will be “welcomed” home after his release on parole and receive prayers from various churches and traditionalists at an event next week in KwaZulu-Natal.

The Jacob G Zuma Foundation said the event will take place on Thursday at the People’s Park in Durban, where “God’s atmosphere will ensure that coronavirus is blown away and not passed on between the attendees”.

Foundation spokesperson Mzwanele Manyi, speaking in Johannesburg on Friday, said the prayer was to thank God for a “sterling job” in protecting Zuma.

Manyi could not confirm if Zuma would be at the event.

“Let’s just pray that he is there but the situation is still fluid because president Zuma is still on medical parole, his condition is a fluid condition, so we hope on the day, the situation will be such that the doctors can allow him to be there.”

Manyi said the country had not forgotten that Zuma had survived an attempt on his life through poisoning.

“People of SA are still grieving that their hero, a true freedom fighter, a man that sacrificed spending quality time with his family, was dealt a severe and unjust blow by the democracy that he fought so tirelessly for.”

He said the foundation was convinced that Zuma had unfinished business in helping to “truly liberate the people of SA”.

“The country is a wreck. The country is deeply divided. The foundation is looking up to its patron ... president Zuma to fulfil the historical mission of the organisation that lives in his blood, the ANC, whose founding mission was to unite the African people.”

Manyi said they hoped to shed more light on this at the welcome prayer.

“The foundation has been observing this mistrust on president Zuma which has been inculcated in the public psyche, particularly by the mainstream media.

“It's actually a traceable observation starting at the Pietermaritzburg high court, where judge Pillay didn’t believe a medical certificate produced by the lawyers of president Zuma, to such an extent that she ordered a warrant of arrest in the event president Zuma was unable to come to court on the next date.

“This mistrust was repeated again at the state capture commission, where acting chief justice [Raymond] Zondo undertook to meet the doctors of president Zuma following his own assessment of the medical report that was given by the lawyers of president Zuma.”